NEWS/MAPS: ClimateWatch: How the rest of May is shaping up and a peek at June and July (+video) 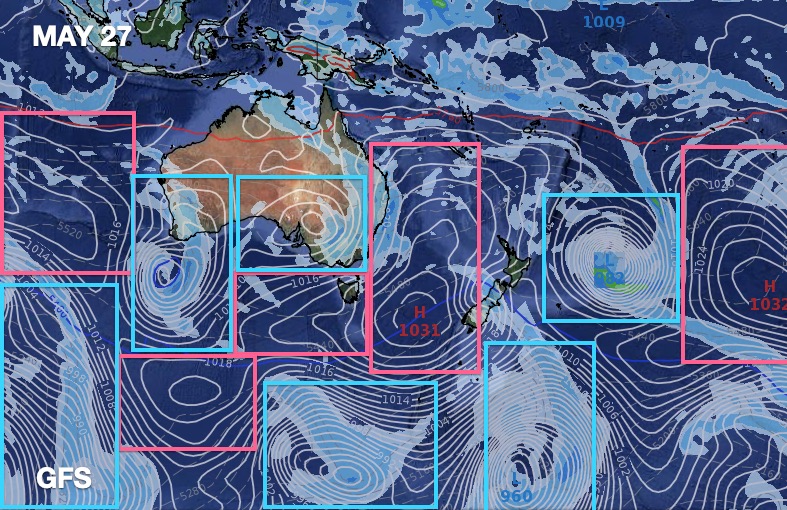 *Originally published on Monday — In our latest climate update (+video) we take a look at the increasingly dry weather pattern returning to New Zealand.

WeatherWatch.co.nz was the first forecaster to warn of droughts developing for 2020 way back in spring 2019, now we are again exclusively talking about dry weather returning from Australia as NZ Government forecasters talk of a rain and cold in their fax funded outlook. (MetService says May looks stormy and cold). (please note: Since our story was published MetService has changed their May outlook to match ours, updating their outlook on Wednesday May 13 significantly. WeatherWatch.co.nz’s outlook/story was originally published on Monday May 11th).

WeatherWatch.co.nz says Australia is again being smothered by a lot of high pressure, limiting rainfall significant for many states. These same highs have lately been drifting into the NZ area and over the rest of May more high pressure is likely here.

But the first week of May did see some good rainfall totals here and there – but it was lumpy. For example some parts of Northland, Waikato and Coromandel have over 80-90mm of rain falling. But parts of the Hauraki Plains had perhaps just 10 to 15 depending on where you were.

Eastern areas of both islands, especially Canterbury, Marlborough and Hawke’s Bay all continue to lean drier than normal with a dry forecast for much of the rest of May.

TEMPERATURES:
Temperatures lean warmer than normal – but only slightly.

Need to make sense of all this? Watch Philip Duncan’s latest 11 minute Climate Video covering May, June and July.

Hi, good work on the forecasting guys! So when can we expect some rain in western (coastal) Waikato? Is next year going to be a drought? Thanks.

Thanks Duncan! From another Duncan.

End of the month some rain may come in. It’s looking quite dry unfortunately for the next week or two at least. As for next year, our crystal ball doesn’t look that far ahead unfortunately. Hopefully it isn’t!

Hi just checking regarding your comment about this dought and how you said there was going be a dought.
1st thing when did you release this information and did you have any idea how bad it was going to be.
Cheers.

Hi David – we said we expected droughts to form this summer (no one else was saying that at the time). We didn’t mention severity – but have repeatedly said for over half a year that we’re in a rainfall deficit and that droughts were likely coming. It was based on Australia being stuck in a worsening drought and the highs from Aussie drifting our way. Regardless of severity, simply being told drought conditions were forming last year should have set off some alarm bells.
Cheers
Phil D

Hi thanks for that information.
In my opinion all droughts are different
usually the rain arrives late march or early april were as this drought that has not happen.
Since early january at my place we have only had about 25 mm to date.
cheers.

Not sure where in the Coromandel got 80 to 90mm in last week. East coast coromandel from tairua to hot water beach got about 15mm. It still very very dry.