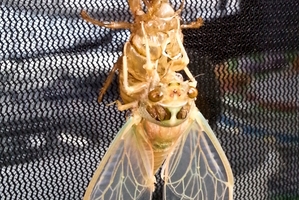 Gardeners will be happy but most who enjoy the seasonal sounds of the cicada’s courtship call will have noticed a definite absence of the unmistakable “song”.

The lack of cicadas is no cause for concern though, according to bug man Ruud Kleinpaste.

The entomologist said cicadas live underground on a five to six-year cycle and it was likely that at the beginning of the last cycle not as many cicadas mated or laid eggs.

“There wasn’t many in the cohort that was born five or six years ago, so this is what we are seeing now.”

The downturn of the cicada chorus and wing-snapping beat this summer is in stark contrast to last year when the insects were prolific.

“It has to do with high and low numbers and not every area is the same. This is an indication that we are in a low number because we should really hear them right now.

“It should be deafening but this is one of those quieter years with not much reproduction.”

A natural fluctuation in population numbers is caused by environmental factors such as a bad summer.

Sodden soil which drowns infant cicadas, early or late frosts, not enough sun and wind could all affect the number of eggs that survive and the amount of cicadas that mate.

Climate records show the weather in 2008 was alternately hot, wet, windy and freezing. There was an “economically disastrous drought” in the west of the North Island, flooding in July when three people died, and a significant snow storm in August.

New Zealand has 42 known species of cicadas. The familiar cicada click is sung by the male of the species to attract females to mate.

Once they mate the female lays eggs on twigs and trees. When the eggs hatch several months later the tiny flea-like nymphs head for the ground.

“They dive into the soil where they will make tunnels and migrate through the soil. They suck on the juices of the roots of plants and six years later they come out again.”

Adult cicadas only live for three to four weeks – enough time to mate and begin the life cycle again.

Smaller green cicadas were singing in November said Dr Kleinpaste, while the larger black ones usually appear in January and February.

“They are the loudest in New Zealand. They go up to 80, 90 decibels sometimes.”

These types are known as the Chorus and Clapping cicadas.

That’s nothing on one Australian type of cicada which can reach 120 decibels and cause hearing damage, Dr Kleinpaste said.

He estimated a busy season would produce one or two cicadas per square metre.

They were denser in forest areas and often appeared after rain, because it produced softer soil.