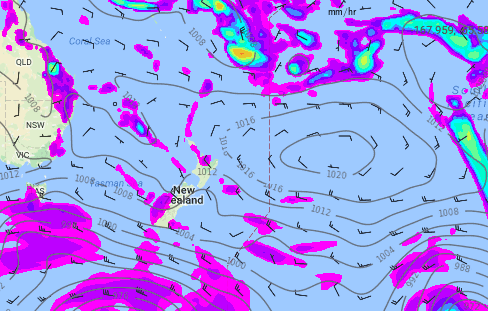 Christmas Day is less than two weeks away so what are the computer models predicting?  Well, a few things actually:

Firstly, over the next couple of weeks the tropics is finally waking up. By that we mean a lot of thunderstorms, daily downpours, humidity and sinking air pressure to the islands directly north of us, especially around Fiji to Vanuatu.

Secondly, as we all know in New Zealand right now, the Southern Ocean is still active and is still sending us windy sou’west changes with showers and cooler weather.

Thirdly, the long range models are showing more high pressure coming in to New Zealand and covering both islands – however there’s a gap between each high which can produce a bit more cloud and showers.

So what’s our forecast for Christmas Day?
We can’t lock it in yet – but we can say that the models are indicating about a 60% chance of settled weather for the country.  A few random long range updates have picked both a tropical cyclone forming north of us while the following day that update removed that risk and instead gave New Zealand the chance of a showery sou’wester.

But when you look at all the models, from various sources, then even them out – it tends to show a slightly better chance for a high around the country on December 25th.

By the end of this week we’ll have a much better idea on whether or not this area of high pressure will be challenged at all from the Southern Ocean or from a tropical weather maker, plus where the centre of this possible high will actually be on Dec 25th.