China: Landslide: more than 80 feared dead after buildings toppled by ‘wall of mud’ 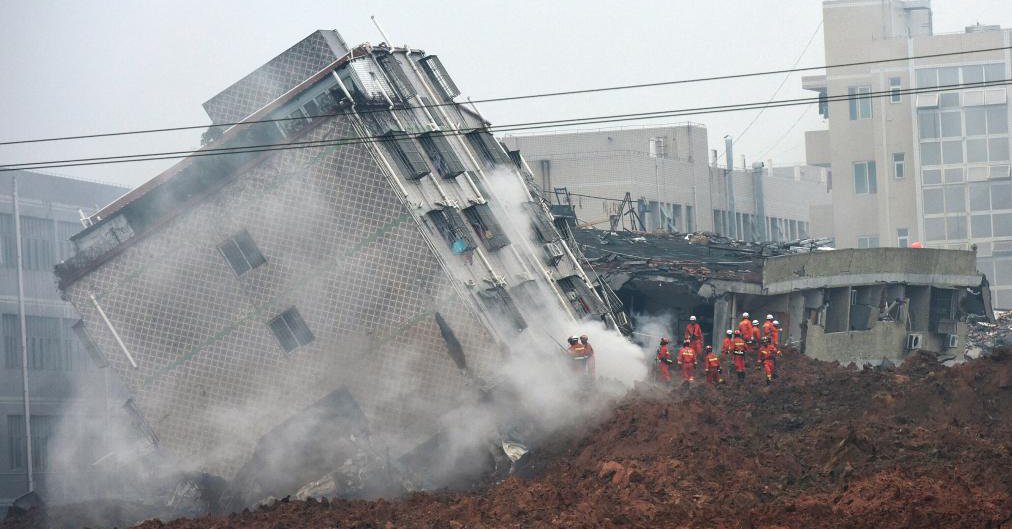 More than 80 people were missing Monday after a man-made pile of construction waste and trash collapsed on buildings in an industrial park in south China, according to Chinese state media.

At least 16 people were still hospitalized, three in serious condition, according to Shenzhen’s emergency response office.

Police received a report of the landslide Sunday morning, authorities said. More than 700 people were involved in searching the debris for signs of life, they said.

Eleven firefighting teams along with four drones and 30 search dogs were involved in the effort, the Guangdong Public Security Bureau said. Officials set up a rescue command center and three treatment shelters on site.

The source of the landslide was a man-made pile of earth rather than a natural mountain or formation, according to China’s Ministry of Land and Resources, whose team of experts is investigating the site. The landslide covered an area of 380,000 square meters, the state-run Xinhua news agency said.

This is what the massive landslide in China looks like from above https://t.co/0CmNXpAA3d pic.twitter.com/YVunyT6wck

Locals told Xinhua that hundreds of trucks carrying construction waste used to dump trash into the pile every day.

A security guard working in a factory in the area told Xinhua that a 250-yuan ($38) fee was charged per truck.

He Weiming, a migrant worker from Henan province, told state media that many of his relatives were buried in the debris.

“My father, mother, son, daughter, wife, sister and her child, sister-in-law and her three children and other five workers were all in there,” he said.

“I’ve made more than 40 calls; none of them got through. At first they didn’t go through, and now the phones are powered off. When my brother and I left home in the morning, everything was fine. But when we got back around 11:40 a.m., our house had been buried. You couldn’t even see the top of the once 4-meter-high building.”

Do you need so many colons in the sentences,makes it hard to save the title names.Merry Christmas to weather watch and to 2016.