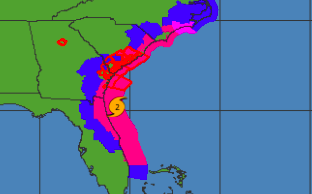 UPDATED 2:37pm Sat — Hurricane Matthew remains a Category 2 hurricane with sustained winds of 150km/h and gusts to 180km/h – while the winds are still destructive they are now becoming less of an issue with the major focus on destructive coastal storm surge and heavy rain both causing flooding in the low lying states of coastal Georgia and South Carolina.

The storm surge – a dome of sea water that has risen 3 metres above the normal height of the ocean around the centre of the storm – is moving north up the coastline and on top of that has waves of up to 8 metres high.

It’s this major sea flooding that is likely to cause the most destruction in Florida and overnight and into Sunday across Georgia and South Carolina.

With Matthew weakening this changes the way we will cover the storm as we expect reports to be slower coming now. The storm is also slowly weakening, as expected.  This is the last update on this page – but we’ll still be covering the storm across the next few days in regular news updates, especially if it looks to curve back towards the US. This is not locked in though.

For those who still want regular updates remember we have set up a MAPS ONLY page with radar updating hourly:

Click here for our MAPS ONLY page just for Hurricane Matthew

SEE THE LATEST MAPS, TRACKS AND WARNINGS HERE – Autoupdates all weekend and into next week  (http://www.weatherwatch.co.nz/hurricane-matthew)