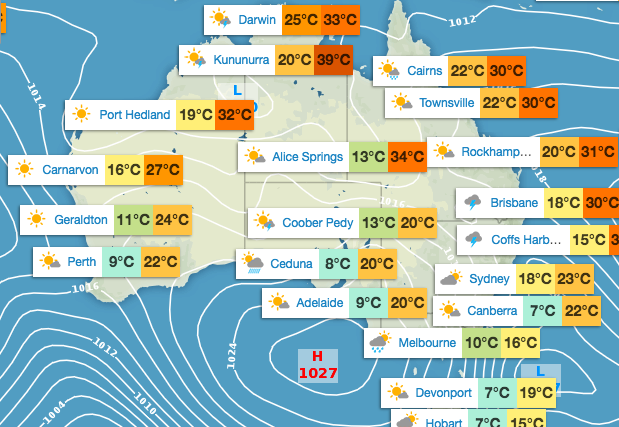 Australians all lived through it, but the Bureau of Meteorology has made it official that September 2017 had some significantly hot days.

It was so significant that BOM released a statement for only the fourth time this year.

These in-depth documents are designed to give more information when unusual weather events occur in Australia.

“We broke quite a number of September temperature records,” said Agata Imielska, a senior BOM climatologist and one of the key contributors behind the statement.

“The most notable of those was the warmest September day for New South Wales’ state-wide average temperatures.”

But there were many more.

September 22 was Australia’s warmest September day since record began in 1911.

“It was the first time we’ve had 40 degrees recorded in September, in NSW,” Ms Imielska said.

And it was not just NSW.

“At Mildura we recorded 37.7C. That’s a new Victorian high temperature record for September,” she said.

Ms Imielska said that both Victoria and New South Wales saw temperatures that were 16C above the September average.

It was not just the high numbers but the spread of the heat that was noteworthy.

“Most of Australia, with the exception of western WA, was experiencing above-average temperatures during these warm conditions.”

With dry conditions and high winds on top of all this heat, the Forest Fire Index was above-average for most of Australia for this event.

The high fire danger has not just been for the few days of this heat event.

“Bushfire season has started early this year, especially if we compare it to this time last year, when there were areas of New South Wales that were experiencing flooding in September.”

So what made this time a record breaker?

On September 20, a high settled over the east of Australia drawing warm dry air down across the continent.

It was followed by series of board troughs, fronts and low pressure systems, further drawing hot dry air in front of them.

But anyone who is into their nightly weather will know that highs and fronts crossing Australia are a frequent occurrence.

Ms Imielska explained that rather than bringing a normal, widespread cool change after they went through, these brought more warm air.

“These changes didn’t bring the significantly cool conditions after the initial change went through,” she said.

“So with the next cold front, with conditions being warmer already, we had another wave of those warmer air temperatures.

“Of course, climate change is another factor here.

“We have been experiencing a warming trend and we continue to set new records and experience these warmer temperatures.

“So [because of] a combination of the natural variability factors and background warming, definitely this season it is important to be aware of heat.”

What about the rest of the year?

Ms Imielska said with dry soils and dry conditions, the landscape is primed to exacerbate any hot conditions.

Heatwaves may not be as exciting as floods or fires, but Ms Imielska warned of the simple dangers of extreme heat.

“Heat is the biggest killer of any weather related hazard,” she said