Blog: Weather Bomb on the way…but we’ll miss most of the explosion 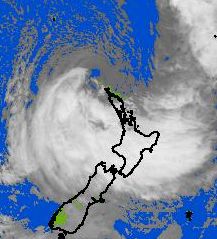 A truck driving in to the front of our building in Auckland was probably the most exciting thing that’s happened today…it certainly wasn’t the weather that stole my attention…grey and dull for many places, although not overly cold – except for the far South.    (Btw – I noticed One News filming the damage the truck did to our building in Cook Street, Auckland – so check it out tonight!).

But things are about to get a little more exciting tonight with a relatively rare weather feature – a “weather bomb”.

The rain has started to set in across northern New Zealand but it’s pretty patchy and light.  Yet again, there is almost no wind for many places but that’s all about to change.

A low pressure system will rapidly deep tonight off the Northland coast then quickly move to east of Hawkes Bay by noon tomorrow.  In fact the rapid deepening means the system is a ‘weather bomb’ which is, in fact, a technical term to describe the air pressure falling 24 hPa in 24 hours (1 per hour).  This one, according to MetService charts, will fall 33hPa from noon today to noon tomorrow – reaching 969hPa.  In fact, once it drops in to the Southern Ocean it could be down to 952hPa!

If you’re not into that geeky science (or have absolutely no idea what I’m saying) it’s basically like getting a flat tyre in your car in seconds.  It’s dramatic and can be violent.  But the good news for New Zealand is that the storm will rapidly form as it moves away from us – to the east of the country.  So while it’s a “bomb” it’s not going to explode over us… although eastern parts of Bay of Plenty, East Cape, Gisborne and northern Hawkes Bay are likely to get some of the blast – MetService has issued a rain warning for the area.

Meanwhile a cold front is approaching the South Island – colder stuff starts later tonight.  This cold front combined with the deepening low means a cold, windy, weekend for much of New Zealand with light snow showers to low levels.

Aue I have to drive to the Hokianga today, anyone know if the forest road is open, its pretty fierce here in Auckland at the moment.

sky is clear but the WIND! it feels like our house is going to blow away. Incredibly wild out there just now, and a little scarey at 3.30 am!

Pressure has dropped to 998.3 at 7.27pm, down 1.2hpa in the past hour. Will Whangarei be getting much heavy rain and/or high winds?

Not going to be too bad for the Far North????? it is gusting 67.3 wind speed is 56 no you dont notice the rain it is just moving too fast to fall… thats a small indication of whats happening at Coopers Beach..