Bliss in the north 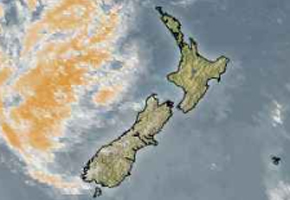 Finally a sunny and calm day for the North Island today with light winds in most regions and resonably pleasant temperatures, there is a little cloud at times in places also. A few early morning showers cleared about Hawkes Bay and Gisborne and it is now sunny, southwesterlies will ease off this afternoon. Wellington and the Kapiti Coast has more cloud then other areas with a light north to northwesterly airflow.

In the South Island many in Canterbury and other parts of the east coast have a cloudy day with light winds, there is a few sunny breaks at times mainly inland. It’s mostly fine and sunny in Nelson and Marlborough, also Southland and Central Otago although there will be a little high cloud. South Westland looks to of started off with some sunny areas however is clouding up a bit, longer sunnier spells north of Hokitika.

Invercargill is on 12 degrees at present, Oamaru on 8.2, Westport 13.5, Nelson 13, Wellington a little cool on 11 degrees with the cloud cover. Napier 15, Auckland through to Northland is on around 16 degrees.

This settled spell will be short lived as can be seen by the impending low forming in the Tasman Sea on the satellite image for today.

A bit cool in Wellington alright – 11c is not too tropical.
Have just filled the clothes line with washing in the hope that it will dry by the time the next bout of rain arrives.
Oh how I wish for a Nor’Wester……..Please!!!

The nor’wester looks like coming later next week, in the mean time your washing should be able to dry out tomorrow if it hasn’t managed it by the end of today.