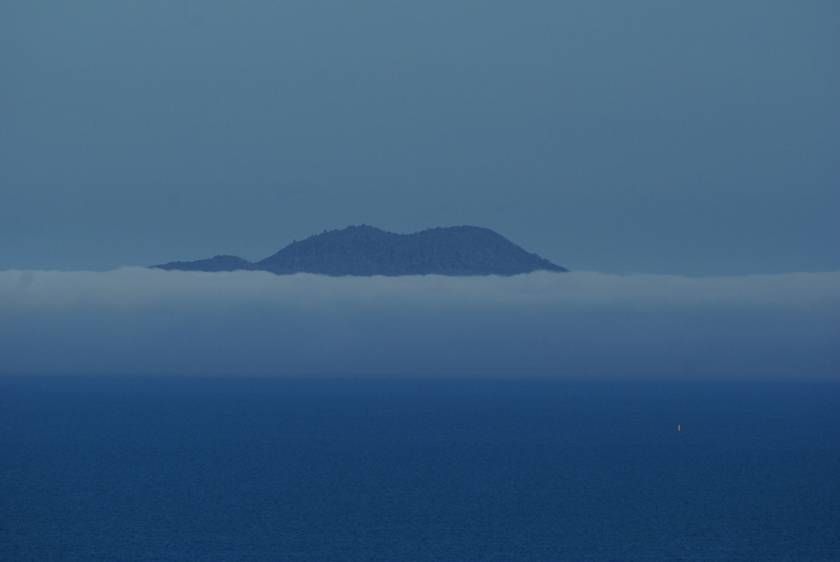 An extremely rare sea fog has this afternoon rolled in to eastern parts of Auckland.

See reader photos of the fog in our Spring Gallery.

WeatherWatch.co.nz has had several reports of the fog moving in to eastern areas, particularly around North Shore and Takapuna…

The fog is clearly visible from eastern parts of Auckland.

Usually you can see across to St Heliers, but not when a fog rolls in. Image / Rick Hall.

Afternoon sea fog is very rare in Auckland and is created when moist air is cooled to saturation point by travelling over cooler sea – most common in Spring.  A gentle easterly breeze is blowing the fog into populated eastern parts of Auckland.

Hey guys thick fog has just moved into Northcote….. I will be interesting to see what its like in the early morning….

Just a quick note to say a huge thank you to the Weather Watch readership who uploaded and sent in their fog photographs – they were all fantastic (thumbs up) thanks again – take care.

can you give us any indication what the weekend weather is going to be like?

We have just extended it out to Sunday:  http://www.weatherwatch.co.nz/content/auckland

Also, at this stage, it looks as though early next week will be similar.

Very rare for us to have several days with the same forecast so we would imagine it will be fine tuned in the next 24 hours or so – but either way it looks dry and mostly calm at this stage.

me again…. just looking out the window and the fog is coming across the sea into Beachlands…..it looks great, will try to take some photos :o)

Wow weird day here in South East Auckland….. chilly in the fog this morning…. beautiful warm sunny day this afternoon but can see fog/mist in the distance…. top temp today in Beachlands of 20.4¬∞C at: 10:45, highish humidity …..didnt have my camera with me so no fog pictures sorry.

Well unfortunately I do not have any fog pics to upload as we are furthur north – however… I am looking forward to seeing if any of the Weather Watch readership send in any pictures.

I was walking along the waterfront this afternoon and watched as it drifted in. Reminded me of watching the same in San Fransisco. I spend a lot of time on the Waitemata harbour and don’t recall having seen this before in Auckland.