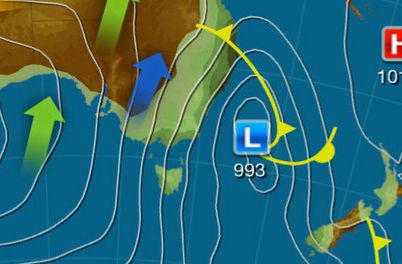 While Sydney-siders were bathing in the warmest weather since April on Tuesday, a real shock awaits late this week. The temperature in Sydney reached 26.6 degrees on Tuesday, close to seven above average.

There is however going to be a significant change in the weather during thi week, with a gradual cooling over coming days before a bone-chilling blast of cold and wind towards the weekend.

A low will begin to deepen over the northern inland of New South Wales during Thursday night and Friday, generating significant rainfall for some regions that have recently been drought declared.

This low will continue to deepen during Friday evening and will assist in dragging a bitterly cold, Antarctic air across the entire state.

There is the prospect the low could undergo a rapid intensification near the NSW coast during Friday night, causing an escalation of wind strengths for areas such as Sydney. Wind speeds along exposed parts of the NSW coast may reach the 70-90km/h range during Friday night and Saturday morning, or even higher, depending on the evolution of the low.

It will be worth keeping up-to-date with the latest warnings late in the week as this low evolves.