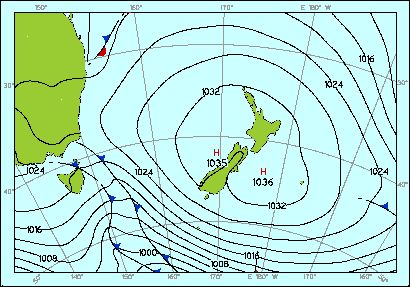 The sunny and calm weather today is due to a very strong high that is currently centred directly over central New Zealand reports WeatherWatch.co.nz.

The high, with a central air pressure of over 1035hPa, has dropped anchor over the country and will continue to bring sunny, settled, weather for at least another 48 hours for most of the country.

However a front and low in the Southern Ocean is going to make an attempt to attack it from the south starting tomorrow in Southland.

The high is then expected to move to the north east allowing wetter weather to move up the West Coast and windier conditions to spread along the eastern Southern Alps and around Cook Strait.

North Islanders and those about eastern Canterbury should enjoy sunny, settled, weather until at least Thursday or Friday before a few fronts move in from the west.

Our beautiful day is disintegrating fast,especially SE of New Lynn. Think some bad weather has snuck up on us.