Between fronts – today is a ‘breather’ 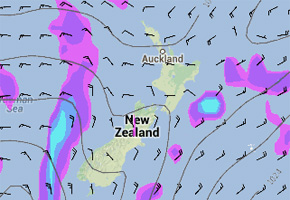 Today we are in a bit of a breather around the country as a front passes out to the east of New Zealand and another lines up ready to move over during the night, which currently is out over the Tasman Sea.

Temperatures in the east of both islands will be rather pleasant with highs up to 16 or 17 degrees possible, north of the Waikato similar temperatures should be expected this afternoon.

Action weather is definitely off the menu today. but. overnight as the front mentioned above moves in from the west. thunderstorms may form on the West Coast of the South Island, especially north of about Hokitika where the odd heavy fall is likely.

As of 7am a number of coastal areas had morning drizzle, light showers and cloud, which should mostly burn off by mid to late morning for the most part.

July was extremely dry for us with 46mm of rainfall. Last time it was that low was in 1983. Do you think at some stage august will balance out or are we in for a warm early spring?

Sometimes wonder where WW is based as we had rain forecasts the last 4 or so days,virtually nothing fell and was sunny quite a bit,today we having a breather,its raining,2 week prior to the last 4 days,fine weather continues,it was overcast virtually throughout.

Hi there – we said all of last week heavy rain was only likely on Thursday night/Friday morning (which didn’t happen in Auckland, the rain was mostly light) – but our weekend prediction was always calling for a lot of cloud, the CHANCE of rain but mostly dry with passing showers. We also stressed that with a sub-tropical low falling apart over the region people should check forecasts across the weekend as they will change.  Despite us not being bang on the mark this weekend we were far more accurate than the govt forecaster who predicted rain and 120km/h winds overnight Friday and across Saturday when we had the sun/cloud icon and "20% chance of a shower".  Wind angle was everything this weekend – easterlies are wet, south easterlies are mostly dry in Auckland and we repeated that message a number of times last week. I think for a tough weekend WW did a good job.

P.s. WW is operated out of Auckland and Canterbury equally, to ensure an even balance of news & information across both main islands.