Batten down the hatches – Situation & outlook for Thursday 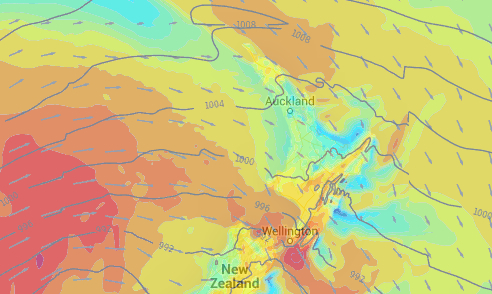 We may have a reputation as ‘the shaky isles’, but so far this week it’s been more like ‘the windy isles’ – and that’s set to continue into Thursday for much of the country.

The reason for the increased speed and ferocity of the wind is a huge, strong west to southwest airflow which currently covers the whole country. For the North Island, from Palmerston North through to Auckland, expect early heavy showers (with a risk of hail) and even thunder, easing to occasional showers which will taper off gradually, and clear by evening – replaced by mostly clear skies. For Auckland city, it’s looking very blustery again, with gales possible for the CBD and surrounds – especially in the morning.

Further north, Northland and the Bay Of Plenty see some morning cloud and the risk of a shower, then things will dry up. The winds about the Bay Of Plenty will be strong from southwesterlies, but these will ease in the evening and give way to clear skies above. Northland continues to see some cloud at times for the rest of the day.

The east coast of the North Island will see some morning cloud, (with the chance of a shower) as southwesterlies freshen, then it should be mostly sunny in the afternoon, with winds tending more westerly.

Wellington has mostly sunny weather, and for once won’t be the windiest place in the country(!). Morning west to southwest winds will tend northwest in the afternoon. Winds about Wellington this time round, while brisk, wonâ€™t be as strong as further north.

For the east coast, look for morning southwesterlies to die away, leaving a mostly fine day for the rest, and the breeze turning northwest. Inland areas can look forward to some moderate to fresh winds, while it will be gentler nearer the coast.

For the West Coast, it’s looking gusty, with southwest winds and periods of cloud increasing towards midday, and the odd shower for the afternoon.

And for Southland and Otago, those west to southwest winds will blow in the morning, with a few showers joining them in the afternoon and early evening. There is a chance of some heavy intermittent falls, and even some hail in parts.