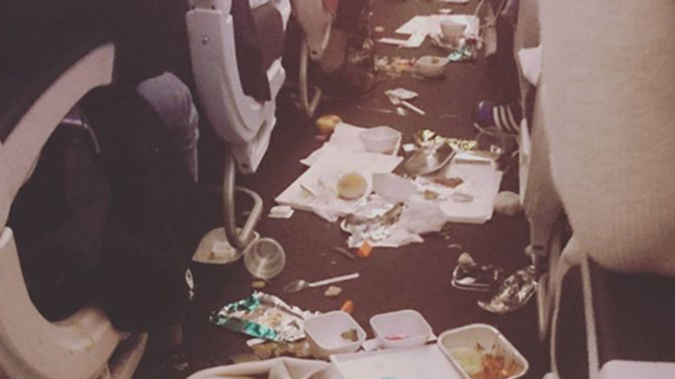 A passenger on an Air New Zealand flight from Tokyo to Auckland has told of the terrifying turbulence that saw passengers lose their dinner before it had finished being served.

Oliver Thilp was on the 787-9 Dreamliner when an hour after take-off there was a big drop, followed by another, and a whole lot of shaking, before the pilots negotiated the plane out of the weather.

He said passengers screamed after the first drop, and as turbulence continued, people began to worry.

“Directly behind us there was a couple who had just got fresh glasses of wine, which ended up on the roof and over a few passengers.”

“The majority of the food was either on the side of the plane or the floor of the plane, but yeah, mostly everything was everywhere.”

Passengers described their moment of terror on social media, with one saying the Air New Zealand staff deserved “a medal”.

The flight was an hour out of Tokyo when it just dropped and started shaking, sending everything up in the air and spraying wine on to the cabin roof.

One passenger, posting on Reddit with username Ollieislame, said the plane was filled with screams.

“It was terrifying actually. I thought that might be the end of me. It was a red eye flight so we got breakfast at the end of the flight in the morning.

“Dinner was just served and everything was fine, granted we were only an hour into the flight. We had a little bump-de-bump at first and then all of a sudden the plane just dropped and started shaking like crazy.

“Then the second drop came. Everything up in the air, wine on the roof. Quite a few screams and general terror.”

Another passenger, whose username was falsabaiana, wrote: “A guy did get burned by the tea. This was an hour into a 10-hour flight so you can imagine the smell by the end. Stuff was even spattered on the ceiling. The Air NZ staff deserve a medal.”

According to another poster a cabin steward was injured trying to clean up the on board carnage.