Autumn coming in with a roar 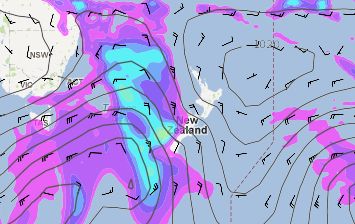 WeatherWatch.co.nz forecasters say March will see a big increase in rainmakers, wind and unsettled weather compared to February – with a band of heavy rain, strong winds and a colder southerly flow all moving up the country on March 1st.

By the weekend a low is expected to rapidly deepen across the North Island and then off the Gisborne coast, pushing in more strong winds and rain.

And despite a brief high arriving later this weekend and early next week, another front will again race up the country by the start of the second week – attached to a large low just south of Southland.  According to the models this low looks likely to linger for a number of days bringing strong westerlies to many parts of New Zealand, especially the south and east of both island and wetter weather to the west.

Another high is expected to calm things down again before yet another cold front blasts in from the west with a strong westerly flow behind it around the middle of March.

Head weather analyst Philip Duncan says the month ahead is looking very Autumn-like.  “Definitely no signs of a late summer surge, instead we’re seeing a dramatic shift to classic Autumn weather with one main rain band moving through each week followed by a short lived high”.

Mr Duncan says with more wind and rain we can expect more turbulent temperatures.  “Some westerlies will push highs up in the east into the late 20s or even low 30s, followed by colder southerlies that could wipe 15 degrees off those temperatures in a small space of time”.

Take a look for yourself – use our free interactive rain, wind, temperature and swell maps up to 14 days in advance.

Hi Have enjoyed reading this (but not learning about the ugly March forecast. Any chance I am going to get fine weather the 10th of March in Whangarei????

Not always – in fact last March we weren’t predicting a mixed bag – we were saying more long hot dry spells with the odd tropical rain maker.  This March we have no dominant weather pattern so we are more exposed to all the extremes.

Guys, any hope the rain will fade by 5pm in Kumeu for our wedding tomorrow?

Hi Dale – it does look as though the worst of the rain will ease around early afternoon… but one model still suggests it wont ease until 5pm. Either way conditions should improve as the afternoon wears on.

So your March predictions mean we’ll be in an El Nino period??

I don’t hold much stock in long term outlooks – too many times the ‘experts’ can end up with egg on their faces.

No, it’s still La Nina – but it is fading.  We don’t hold much into long range forecasts either – but 2 to 4 weeks is doable.

…like summer, like autumn!!! So we grudgingly trudge into winter…
Firewood delivered and stacked (8 cu/m), kindling kindled, firelighters alighted, chimney decoked, dehumidifiers dehumed, heat pumps pumped, gas fires gassed, condensation towels stacked and ready, mould sprays primed. Bring it on winter…this Aucklander is ready to boogie for the next nine months!!! The Falklands might be a good choice for a summer break next year…