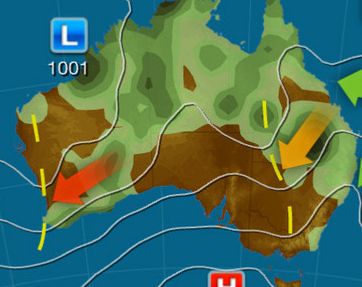 Record breaking heat in Sydney, flash flooding in Melbourne and heavy rain and winds in Alice Springs all topped off an extreme 48 hours weather-wise in Australia this weekend and today things aren’t much better.

While the heavy rains have eased in Victoria and a cool change has finally broken Sydney’s week long heat wave Western Australia and the Northern Territory are now making the headlines.

A major bush fire is now out of control near Perth and media reports are saying up to 40 homes have been destroyed.  Hot winds from the desert will continue to push across the city with our weather partner Weatherzone predicting a high of 32 today in Perth with strong winds and smoke haze across the city.

Meanwhile in the Northern Territory residents are evacuating as ex-cyclone Yasi continues to drop heavy rain in the area.

The ABC is reporting hundreds of residents are fleeing the area to avoid flood waters.

In one piece of positive news the Bureau of Meteorology this morning cancelled severe thunderstorm warnings for South East Queensland saying the immediate threat of flash flooding had now passed.