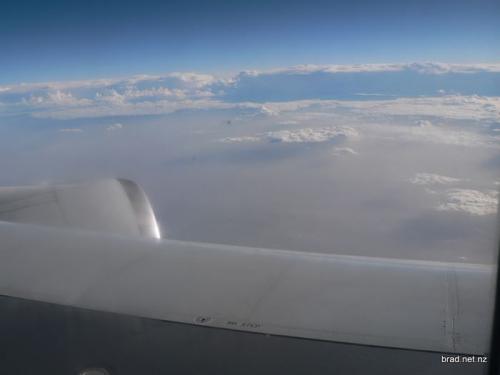 WeatherWatch.co.nz has been inundated with reports of Australian dust from Australia today from Auckland, Northland, Waikato, Bay of Plenty and Taranaki.

Head weather analyst Philip Duncan says the dust has fallen in all the areas expected.  “We predicted yesterday that the dust would fall across northern New Zealand and it appears the thickest dust cloud crossed Northland and the Far North overnight”.

WeatherWatch.co.nz reader Dale Small says it’s still very hazy in Paerata/Pukekohe. “Even with the sun out I can barely make out the Bombay Hills and the Hunuas are next to invisible as is the Glenbrook Steel Mill which can be seen in almost any weather conditions”.

Mr Small says he went into town for an hour and a layer of dust coated his car.  “Argh, bloody aussies and their hot air!”.

Another WeatherWatch.co.nz reader, Mike, from New Plymouth, says the dust won’t budge despite heavy showers in the area. “I work mornings at a school in New Plymouth & we have flat roofs on the buildings that are normally silver but this morning they were covered in a burnt orange very fine silt,that had accumulated to approx 2mm in places with the run off from the rain”.

“Must be quite heavy dust cause the downpours we’re having isn’t really shifting it.  My roof water flush tank at home has turned a dirty orange colour also” says Mike.

Near Kaeo Noreen Kirwin has a similar story with “quite thick” sticking to vehicles despite the heavy showers.  Noreen says the dust is clearly visible on numerous objects.

Northland resident CD Davis took this photo below of the dust that gathered on her windscreen this morning.

While forecasters tracked the dust clouds progress yesterday afternoon WeatherWatch.co.nz reader Bread Heap snapped this picture from above the clouds.

“Dust Storm below the clouds while flying to Sydney around 5pm Thursday 24th September, around 40 minutes out of Auckland” – Brad Heap.

Despite heavy rain across Taranaki last night a number of locals have reported thin layers of red dust on cars and buildings this morning according to our New Plymouth WeatherWatch reporter John Blackman.

Mr Blackman says they’ve had reports of a very minor trace of dust, but one that is definitely noticeable.

Meanwhile an Auckland WeatherWatch.co.nz reader posted a comment on the site this morning saying “We didn’t get snow here in Auckland but did anyone else notice the thick dust over the windscreen this morning? Hope it clears tonight for a spectacular sunset!”.

Two other readers one from Auckland and another from Tauranga also reported dust on the windscreen of their cars that clearly turned muddy when the windcreen wipers were switched on.

In Hamilton Classic Hits Breakfast Announcer Mark Bunting also says there are reports of dust in the city this morning.

Head weather analyst Philip Duncan says Auckland definitely has a haze about it today and is more than likely the remains of the Australian dust storm passing over. “It arrived yesterday afternoon but was caught up in the rain and cloud associated with the front. Now that the skies are clearing it’s quite evident”.

Mr Duncan says the hazy weather will likely only last for the rest of today but suggests people who photography may get a few good pics today. “If the haze lasts until sunset, along with a break in the clouds, it could make for some dramatic and stunning sunset images”.

I drove over the Bombay Hills about 3pm aghast to find No Auckland City to be found & wondered ” what the ” friggen hecks goin on ? Auckland waz invisible & completely dissapeared in a greyish dull hazy something I now understand it to be aussie pollution again. Typical aussie fires outa control again & we get all the shit from them.again & again.

The dust is one thing but i wonder how many bugs have travelled over on the dust??? yikes!!!!

I work mornings at a school in New Plymouth & we have flat roofs on the buildings that are normally silver but this morning they were covered in a burnt orange very fine silt,that had accumulated to approx 2mm in places with the run off from the rain.
Must be quite heavy dust cause the downpours we’re having is’nt really shifting it.
My roof water flush tank at home has turned a dirty orange colour also.

Maratoto Valley (between thames and Paeroa)
A thin film of fine yellow red dust on my windshield this morning.

Yes, there’s noticeable traces of yellowish dust on window ledges, even on large leafed plants, where the water has run off and left the dust behind.
My car is covered with the stuff after driving in heavy rain.

We had the dust haze here in Hamilton this morning, appeared to be typical Hamilton mist, which usually wets you if you stand in it. However this was brownish tinged, almost like dirty smoke in the distance, it was high up, it hung for quite some time until it clouded right over and we got another downpour.