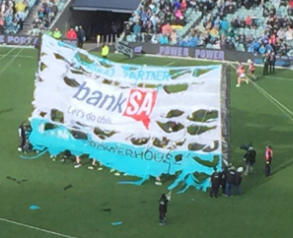 High winds described by the State Emergency Service as a “storm cell” have ripped through Somerton Park in Adelaide, damaging roofs and bringing down trees.

“The SES has received reports of a storm cell going through Somerton Park earlier this afternoon and that’s caused quite a bit of damage to a number of houses,” Mr Carr said.

He said there were a number of reports of fallen trees and warned drivers of the potential for black ice on roads.

Strong front approaching #Adelaide. The strongest winds and heaviest rainfall moving through in the next 1-2 hours. pic.twitter.com/JmeR0eWLU2

Mr Carr said crews had responded to about 125 callouts so far today, which was on top of the 200 calls it received on Sunday.

Meanwhile, train commuters faced major delays on the Seaford line between Brighton and Seaford due to the bad weather on Monday afternoon.

Adelaide Metro said a sheet of iron was blown into powerlines near the Lonsdale sub-station cutting power to the line.

It said the line had to be shut down for safety reasons.

The company tweeted at 8:21pm that the damage had been repaired and services were returning to schedule.

The department has also asked motorists to drive with care due to slippery conditions and fallen trees.

The front has moved through #Adelaide, wind and rain now easing. Take care on slippery roads and beware of debris. https://t.co/5wxFrWeCue

Drivers were advised to reduce their speed, turn on headlights and avoid driving through floodwater.

The weather bureau has cancelled its severe weather warning for the state but warned another strong front was expected on Tuesday.

It had forecast damaging wind gusts of between 90 and 100 kilometres per hour (kph) and showers.

Gusts of more than 100 kph have been recorded at Neptune Island off Eyre Peninsula in South Australia for the past three days as wild weather has battered the state.

Parndana recorded wind gusts of 90 to 93 kph about 12:45pm while 91kph was recorded at Mount Gambier.

Ferry services between Cape Jervis and Kangaroo Island are set to resume this evening.

SeaLink said wind and sea conditions were improving, and services would be operating with a one-hour delay.