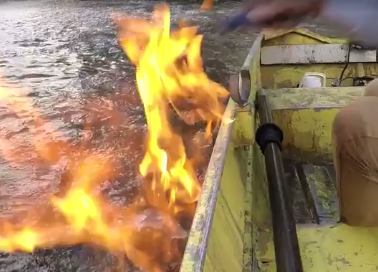 Rivers aren’t supposed to go up in flames when you set a match to them.

Unfortunately, the Condamine River in the Australian state of Queensland is apparently prone to ignition, as demonstrated by Jeremy Buckingham, an Australian Green MP. Its flammable nature is due to methane infused within it, and Buckingham says he was “shocked” by the force of the explosion.

The MP blames nearby coal seam gas operations for the release of methane into the environment.

“There has been concern that fracking and extraction of coal seam gas could cause gas to migrate through the rock,” Buckingham wrote on Facebook when he uploaded the video. “Not only is it polluting the river and air, but methane is an extremely potent heat trapping gas. Fugitive emissions from the unconventional gas industry could be a major contributor to climate change and make gas as dirty as burning coal.”