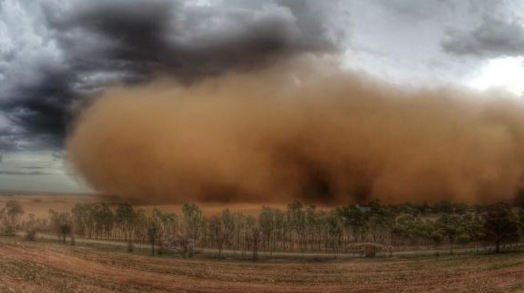 A severe dust storm has swept across parts of the mid-north of South Australia and into the Barossa Valley, north-east of Adelaide.

The weather bureau said a thunderstorm with strong winds had stirred up dust from the Pinery bushfire ground.

“Obviously there’s still a lot of exposed soil in that area. We had a couple of thunderstorms move across the fire ground in the last few hours,” he said.

“We actually had a wind gust recorded at up to 93 kilometres per hour at Roseworthy.

“The visibility looks like it was definitely less than 100 metres in some parts.”

A storm rolls in over a dust storm in Adelaides north today @abcnewsAdelaide @abcnews #storm pic.twitter.com/MUTAGwJnwX

He said more rain was forecast during the evening.

“We might even see a little bit more shower activity over the area to hopefully settle down the dust a little bit [and] the next few days definitely will be cooler,” he said.

The highest wind gust recorded during the afternoon was 100kph at Warburto Point, near Wallaroo, on Yorke Peninsula.

Wild storms are moving across the state reducing visibility on the roads. @AmeliaMulcahy7 has the latest. #7News https://t.co/Du92C1H8Jj

At the height of the dust storm, five vehicles were involved in a crash at Tarlee that left debris across the Horrocks Highway.

The Country Fire Service said it had received many phone calls from people worried about the dust storm.

It advised people to close doors and windows, and remain indoors to avoid any adverse health effects.

The cooler change sweeping across SA led to power outages in a number of areas, including thousands of properties in the Whyalla area.