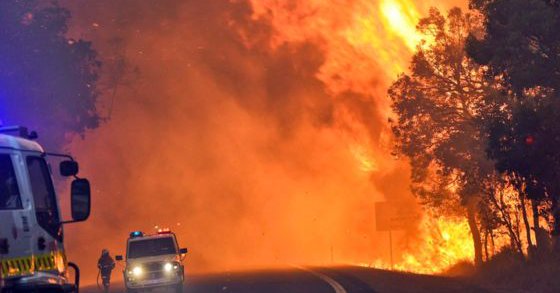 Human remains have been found in two burned out houses in the town of Yarloop, south of Perth.

It’s believed they’re the bodies of two men in their 70s, who’ve been missing since fire swept through the town earlier this week.

A team of 60 are being flown in from New South Wales, to help deal with the fire which destroyed more than 100 homes at Yarloop, south of Perth.

Wayne Gregson of the state’s Emergency Services Agency, said some local firefighters have been going for two days straight.

This is the size of the #WaroonaFire overlaid on #Perth metro area Donations here https://t.co/uT8GcooFaz pic.twitter.com/oZ3hMYDF75

“It’s just around fatigue management, there’s some very tired fire fighters out there in need of some relief and we want to maintain the capacity for Western Australia. So we’ve got a great arrangement with other states to bring resources in.”

“Guys have been out there fighting the fire for 30 hours on end – exhaustion is coming in, we’re pleased that a new contingent of firefighters is coming from new South Wales, and I very much appreciate the support of New South Wales Government.”