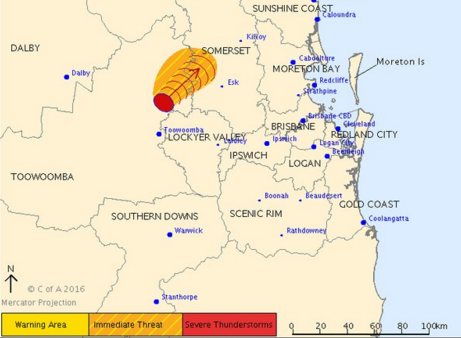 Whilst the storms affected some parts of the state’s central coast, the Great Dividing Range received the most severe and widespread activity.

Mount Douglas (west of Mackay) copped a deluge as a slow-moving thunderstorm dumped 117mm in the 24 hours to 9am, its heaviest rain in four years.

Further south on the Darling Downs, a number of severe thunderstorms developed. The strongest of these cells tracked from north of Toowoomba through to Crows Nest, dropping hail, heavy rain and strong winds.

Thunderstorms will again be active today due to the trough, particularly over the central and northern inland where heavy rain, strong winds and hail are a chance.

On Tuesday, thunderstorms will become more isolated, before generally clearing from Wednesday.