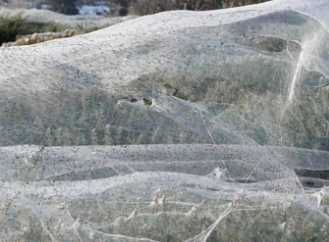 Spiders trying to escape rising floodwaters in northern Tasmania have turned treetops white with silk thanks to a phenomenon known as ballooning.

Trees at Hagley, just outside Launceston, are covered in webs with small black spiders crawling over them.

Queensland Museum’s head of arachnological division, Dr Robert Raven, said the spiders were using a technique known as ballooning â€” when they throw out silk filaments and catch a ride on the wind to higher ground – to escape the wet.

“It’s just an amazing event of nature and should be thought of like that,” he said.

“Many spiders are putting out the silk trying to get away and it’s just forming a mat … there are hundreds and hundreds of spiders on that little tree.”

“Think of them like a hot air balloon,” he said.

“When it works properly the spider pulls out enough silk into the air and it’s trying to get lifted off the vegetation … once an updraft of warm air comes the spider releases and goes with its silk into the atmosphere and in some cases the stratosphere.

“If cool air comes along they’ll get down again … they’re working on those warm updrafts.”

Dr Raven said it did not take much rain to drive spiders from their homes.

“It’s nothing to worry about. It’s just a remarkable event of nature showing how many spiders are about.

“Everything that normally is down low on the ground is getting up and getting away from it.”