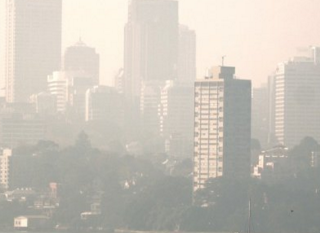 Hazard reduction burns over the weekend have reduced air quality in the Sydney area and light westerly winds overnight will cause it to deteriorate further by Monday morning.

During Sunday most of the smoke could be seen flying high in the sky, held aloft by fairly strong winds, posing little problem to the millions of people on the ground. However, late in the day the wind across Sydney dropped off, causing some of the smoke to fall towards the ground, prompting some residents to ease off with their exercise.

During Sunday night wind will be fairly gentle, even becoming calm at times, encouraging more smoke to descend. By Monday morning the smoke may be thick enough for some asthmatics and those with other respiratory problems to begin to feel the effects.

The usual morning walk or jog may have to be postponed for a day or two.

In general, the air quality is unlikely be nearly as bad as a week-and-a-bit ago and it should improve as the week goes.

Strengthening winds from a few passing weak cold fronts will cause the smoke to disperse from Tuesday.