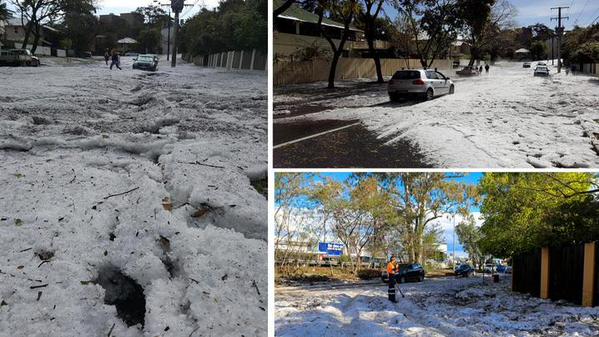 No major damage has been reported after a hailstorm passed over south-east Queensland on Sunday.

The Bureau of Meteorology issued a severe thunderstorm warning at 2:30pm, warning of heavy rainfall and large hailstones near Brisbane’s CBD.

The storm had earlier been near Logan before it moved north-west toward the city.

The bureau said “golf-ball-sized hail” was reported at Indooroopilly at 2:15pm, with small hailstones reported south of Brisbane.

Heavy rainfall also lashed the city and inundated roads, with 39 millimetres of rain recorded in just 15 minutes at Toowong. There were also reports of isolated flooding in nearby Indooroopilly.

By 3:00pm, the bureau said storms were no longer affecting the south-east, but warned small hail could continue throughout the afternoon.

An SES spokeswoman said the service had received about a dozen calls for assistance by 6:00pm, with most calls from the Taringa area.

She said there were also three calls in the Logan area with leaky roofs the most common complaint.

Residents have been warned to prepare their properties for more storms as the wet season begins.

Brisbane residents took to social media to share their photos of the storm, with photos showing backyards blanketed in small hail stones.