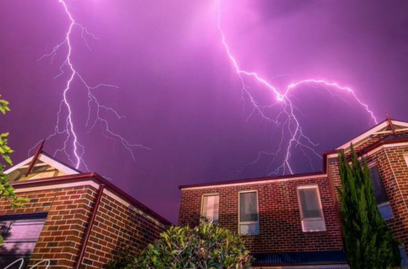 The SES received more than 500 calls, mainly for downed trees and building damage in Warragul and Melbourne’s east and south-east.

Most areas received between five and 15 millimetres of rain, but up to 40 millimetres fell in the state’s north-east ranges.

Winds of about 100 kilometres per hour were recorded on the bay and in the state’s south-west.

SES state duty officer Gerry Sheridan said the storm built up momentum as it moved across the bay.

“The hardest hit suburbs that we’ve had is Narre Warren, in the south-east suburbs, and places like Monash, Clayton, Mount Waverley and Chadstone,” he said.

“As the storm cell moved across the bay, it built up a little bit of momentum. It’s those populated areas Ã¢?? the usual suspects get hit again.

“Another location is Lilydale. We’re seeing over 50 jobs out that way as well.”

Residents said Ashwood, in Melbourne’s south-east, looked like it had been hit by a tornado.

“The whole street was covered in branches,” local resident Lisa told the ABC.

“The power pole was down on one of the cars here and the SES arrived pretty much straight after that.”

Bureau of Meteorology senior forecaster Rod Dickson said the weather was unusual for this time of year.

“We had a fairly active cold front combined with an upper-level trough,” he said.

“That produced quite widespread thunderstorm activity, which developed over the north-west late Saturday afternoon then extended into central parts of the state towards midnight.

“Typically we normally see severe thunderstorm activity during the afternoon during the warmer months.”

The front was weakening as it moved east.