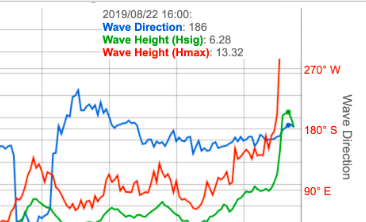 A large and powerful swell hit the NSW coast on Thursday, with maximum wave heights exceeding 13 meters near Sydney.

A waverider buoy located about 10km off Sydney’s Northern Beaches registered a maximum wave height of 13.32 metres at 4pm on Thursday.

This is an impressively large wave for the central coastline of NSW. The largest wave measured near Sydney during the notorious June 2016 swell event that caused caused significant coastal erosion was 12.0 metres. However, that swell approached Sydney from the east, which caused waves to strike the coast directly. By contrast, yesterday’s swell was coming from the south, allowing the largest waves to bypass most beaches.

Another waverider buoy located closer to the coast, near Botany Bay, registered maximum wave heights up to 10.63 metres on Thursday afternoon.

Damaging surf is easing gradually during the weekend.