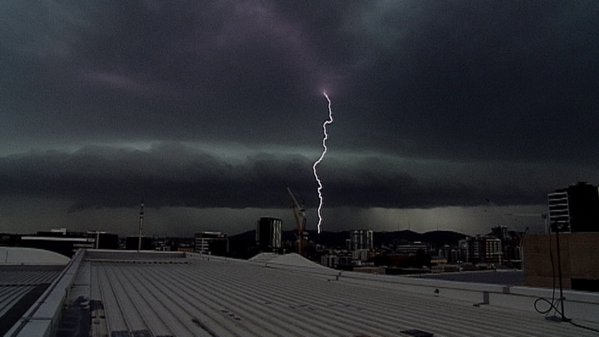 A severe storm has passed through Brisbane, leaving thousands of properties without power and bringing trees down ahead of the peak hour rush.

Trees toppled over in a number of inner-Brisbane suburbs as wind gusts, up to 90 kilometres per hour rattled the city yesterday.

Energex said at 7:30pm about 3,500 homes were without power in the south-east.

Outbound trains on the Ferny Grove line were suspended and commuters were forced to wait up to an hour to get home.

The storm cells, which started east of Toowoomba, rapidly intensified to pass through the CBD about 4:30pm.

They headed east and at 5:45pm were moving towards North Stradbroke Island.

A separate severe storm, which also originated near Toowoomba, rolled through townships west of Brisbane earlier yesterday afternoon, which just skirted around parts of southern Brisbane.

“Still only small hail reported so far,” he said.

“That’s pretty lucky because our radar had shown large hail.”