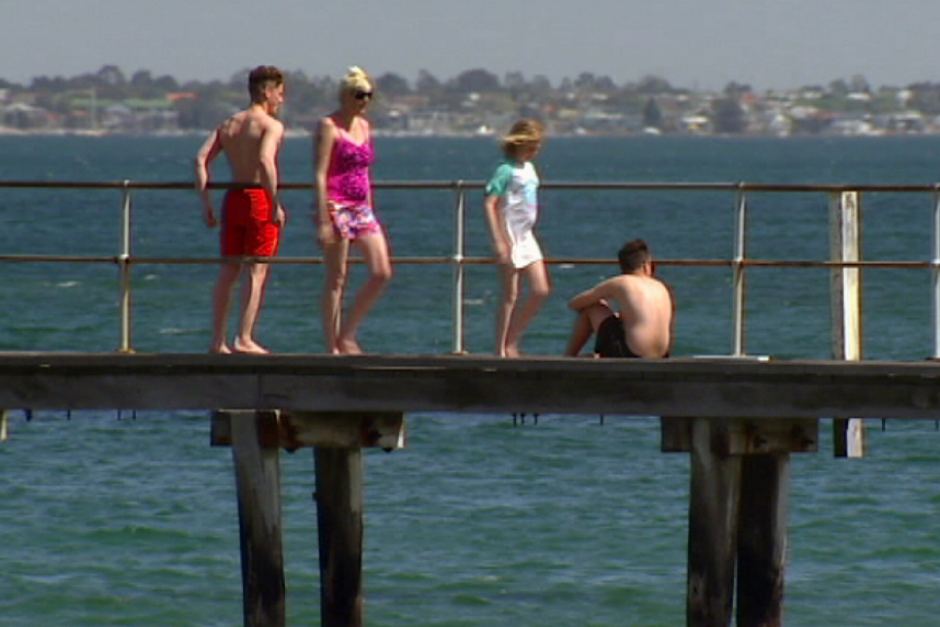 Adelaide has recorded one of its hottest October days in 70 years, with the temperature reaching 35.6 degrees Celsius, as Country Fire Service (CFS) crews battle blazes across the state.

The Bureau of Meteorology said Monday was the hottest day Adelaide had recorded so early in spring.

Duty forecaster Dominic Panuccio said Adelaide also matched the record for the hottest day in the first week of October, which has stood for more than 70 years.

Mr Panuccio said the temperature reached 40C in some parts of the state.

“So far the hottest (sic) temperature in the state is 40.4 degrees at Nullarbor over in the far west there and that was recorded at 3:23pm.”

Mr Panuccio said it was going to be warm overnight as well, with a change unlikely to come through until about 9:00am on Tuesday.

Extreme fire danger ratings were issued for the Mount Lofty Ranges, the state’s lower south-east, and Kangaroo Island with total fire bans in place for all three areas.

Several fires have already caused problems for crews this weekend with a scrub fire in a national park near Port Lincoln and a suspicious blaze in a pine forest at Mount Pleasant.

CFS assistant chief officer Mick Ayre said it was the start of what was likely to be a very dry fire season.

He said “the green” in scrubbed areas would work in firefighters’ favour with blazes unlikely to run away quickly.

“Most of the grass and crops around the state are still relatively not cured, there is still a lot of green that [regional committees] think … the fire danger season in each of those areas will commence as normal,” he said.

“So that will be a staggered start depending upon where they are in the state from the first of November through to the first of December in the Mount Lofty Ranges.”

“We didn’t expect that we would see temperatures like this at this time of the year.”

Melbourne has sweated through its hottest start to spring on record, with hot and blustery conditions expected to continue on Tuesday.

The city reached 34 degrees Celsius at 2:45pm on Monday, the highest maximum temperature on record for this early in Spring.

Melbourne has never reached 35 degrees in the first week of October since records began in the 1850s.

It was hotter out west, with Avalon hitting 37C and Laverton 36C, but conditions were much cooler in Frankston, which reached a pleasant 27 degrees.

The regional areas also felt the heat – Swan Hill and Horsham both reached 37 degrees, while Bendigo saw a top of 34C.

Towns in the Mallee region are forecast to reach 38C again on Tuesday, while Melbourne is expecting 35C with a gusty afternoon cool change.

A total fire ban has been put in place for much of the state.

Chris Godfred from the Bureau of Meteorology said the state was on track for another milestone on Tuesday.

“If we do reach our forecast maximum once again of 35 tomorrow, I think that will be the first time in October that we have had consecutive 35-degree days,” he said.

“September itself in Melbourne, especially for the first couple of weeks, was a bit of a damp squib, it was almost the continuation of Winter.

“But as we started to move towards the end September and the start of this month we have started to encounter some genuine warmth.

“Today has moved right into the hot category. It’s pretty special really, so I think that’s certainly one that’s worth putting in the scrapbook.”

Mr Godfred said temperatures in September were close to average, but rainfall was harder to come by.

“It was fairly dry across most of the state, there were quite extensive regions which had less than half the rainfall that you would expect.”

The unusually hot start to October also prompted authorities to warn Victorians to prepare for an early start to the fire season, with the North Central district expected to bear the brunt of soaring temperatures.

The region, taking in areas around Castlemaine and Bendigo, has been declared an extreme fire risk.

Fire crews battled more than 70 fires across the state over the weekend, including a controlled burn that became out-of-control at Lancefield and came within a few hundred metres of homes.