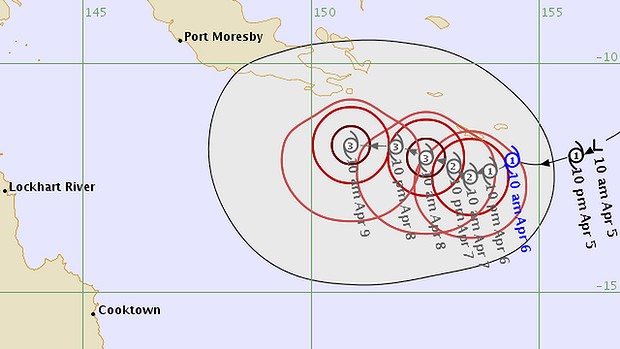 Authorities in far north Queensland say they are as prepared as they can be for Tropical Cyclone Ita, which the weather bureau predicts will make landfall as a category-four system.

The category-three system is north-east of Cooktown and is expected to cross the coast on Friday night between Lockhart River and Cape Flattery but will affect communities south to Cairns and 300 kilometres inland.

Mr Connor says the monster storm is expected to make landfall late on Friday night and then move south-west.

“At the moment the wind gusts are up to 220kph, but as the system intensifies, we may get wind gusts up to 280kph in that destructive zone near the eye,” he said.

“The most likely path for the system is for it to cross somewhere south of Cape Melville as a category-four system, then we’re expecting the system to gradually weaken as it moves inland.

“The friction of the land will cause the system to reduce intensity to a category three.”

The weather bureau says Ita is the most severe system it has seen approach the Queensland coast since Cyclone Yasi in 2011.

Mr Newman says he will travel to Cairns and possibly Cooktown this afternoon to meet with local disaster management teams.

“I’m going there to make sure that they’re getting every assistance to protect their communities,” he said.

“My first responsibility is to Queenslanders – that’s why I’ve come home.

“I do warn Queenslanders in the far north that this is a very damaging storm.”

“The service stations have all got plenty of fuel. I know our airstrip has got gas and jet fuel to cater for choppers and what have you,” Mr Scott said.

“We’re about as prepared as we can be, I believe. Having said that, we are getting support from external agencies like Queensland Police, Fire and Rescue and emergency services – they’re sending up additional people.”

He says Ita is likely to down powerlines, and Ergon Energy has advised it will send additional crews up as soon as it can after the storm passes should power be cut.

“Most of our large establishments like the big hotels, the supermarket, the hospital, the events centre, cyclone shelter – they’ve all got standby generators which can operate for at least 24 hours without refuelling,” he said.

Mr Scott says authorities are likely to make a decision at lunchtime today on whether to activate Cooktown’s cyclone shelter, which is rated to withstand category-five storms and able to hold up to 1,000 people.

He says if Ita is still predicted to cross the coast near Cape Melville, the shelter is likely to be opened to the public from Friday morning.

“It’s commonly accepted that the best place for people to be is in their own home in a safe room with their cyclone kit, with their kids, with their pets,” he said.

“If their house is not strong enough or hasn’t been built after 1985, go to a friend or neighbour’s place, but there’s always the option of the cyclone shelter if you haven’t got any other option.”

Other communities on high alert for cyclone

Mr Scott says other communities around the Cape are on high alert.

The Great Barrier Reef resort of Lizard Island was evacuated yesterday as a precaution and will be closed until Sunday.

He says there are also concerns for the Aboriginal community of Hope Vale, near Cooktown, which is home to about 1,000 people.

“They’re in the firing line too. If it comes in from the north, Hope Vale’s very much on the valley that leads up from the beach and they could cop it pretty hard as far as the wind and rain goes,” he said.

He has also advised residents of Port Stewart to seek shelter in nearby Coen.

“There could be 50 to 100 people down there, largely the Lama Lama Traditional Owners and the rangers based down there,” he said.

“But that is very low-lying and very exposed too, so myself and police are encouraging those people to be a bit prudent and move back up the hill to Coen.”

He says while far north Queenslanders are used to cyclones, locals are apprehensive about what Ita will bring.

“My concern is the direction it’s coming from, the fact that it left a nasty legacy in Honiara and it’s going to be a category four, severe category four at this stage, crossing the coast,” he said.

He says the store had one of its busiest days on Wednesday, but it has been very well organised and there is plenty of stock, with more coming in tonight.

“[It’s] 48 years since the last cyclone and this one’s going to be one hell of a cyclone if it comes at us,” Mr Scott said.

“We’re going to get a bit of a hit from it, hopefully not too big of a hit.”

Laura Devaurno, the manager of the Hann River Roadhouse, nearly 400 kilometres north-west of Cairns, says she has closed the business in preparation for the cyclone.

She says only two staff will remain on-site.

“We’re OK, we’re just about to head to town because it’s probably the safest place for the kids,” she said.

“It’s coming straight over the top of us here, so we’re taking our precautions and we’ve got to take the kids out.”

Councillor Leu says emergency information kits have been issued to both vistors and locals.

“We have got a lot of visitors – it’s about a 60 per cent capacity because of Easter coming up,” she said.

“Obviously we’re not quite sure whether some of the people who are about to arrive in the next couple of days will, but if they do, naturally we want to make sure that they’re safe.”

Been upgraded to cat 5 according to BOM.

Is this the same Low that looks to be west of NZ this time next week looking to play a merry jiggle with us?