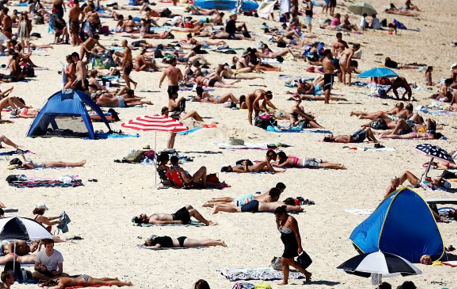 Perth has recorded above 40 degree Celsius temperatures for three days in a row, melting a February record which has stood for more than 50 years.

The city has sweltered in this sort of heatwave just seven times since records began.

Bureau of Meteorology (BoM) spokesman Neil Bennett said there would be no relief on Wednesday, with similar temperatures predicted.

“The trough is showing no signs of movement whatsoever, it’s sitting there because the high pressure system that is going to help move it away is also stationary in bight,” he said.

Mr Bennett said the last time Perth recorded three consecutive days of 40C or above was in January 2010.

But if the temperature reaches 40C or above on Wednesday, it will be the first time there has been four consecutive 40C days since 1933.

“Perth’s longest run of 40 degree days or more consecutively is four, and that was recorded back in 1933, if we get five we’ve broken that record and we’ve moved into uncharted territory basically,” Mr Bennett said.

At this stage BoM is expecting the temperature to peak around 38C.

Electricity consumption has soared in recent days with Monday usage of more than 4,300 megawatts breaking a record set in January 2012.

Temperatures also climbed faster on Tuesday in the metropolitan area than the day before.

At sunrise it was 20C, two hours later it had reached 32.

By 11:00am on Monday, Perth was sweltering at 40C with the temperatures peaking at 41.2C in the metro area.

Pearce airbase was the hottest place in wider Perth at 44.3C and Mardie in the Pilbara was the state’s hotspot, reaching 45.6C.

Visitors arriving from the UK at Perth airport had flown straight from the winter into a blistering welcome.

“It’s a sauna. That’s it I’m going back in the air-conditioning inside, I’m staying here,” Brian Scott said.

“Aussies moan about it, but you don’t know how lucky you are, the weather is lovely,” Rosemary Scott said.

Colin Proctor was wearing a woollen jumper when he exited the arrival gate outside.

“I thought I would be dressed for the occasion. I am in a jumper, yes but it’s tradition, it was four degrees when I left home,” he said.

“But it feels a bit a like being inside a hairdryer, it’s very hot,” he said.

He mustn’t of noticed mention of the weather as they came into land.  Lucky he didn’t faint.