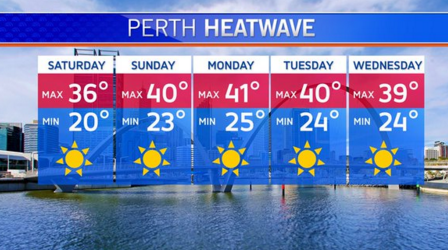 A deepening trough along the WA coast is dragging hot air south, causing a heatwave to develop from Geraldton to Corrigin to Donnybrook, including the Perth area.

The definition of a heatwave has long been debated by those in the weather know.
One of the accepted definitions is ‘three or more days of unusually high maximum and minimum temperatures’. Perth’s February average maximum temperature is about 31 degrees and the minimum average about 18. Temperatures are on the rise, and this coming Sunday, Monday and Tuesday should all reach about 40 degrees.

Perth bracing for a weeklong heatwave, with temperatures soaring into 40Cs for several days: https://t.co/ImU148T21Y pic.twitter.com/Ea6l4vsXY2

Nights will be uncomfortable, only cooling to about 23-to-25 degrees in the early mornings. Wednesday should also be a balmy 39 degrees, so it appears Perth falls well and truly into the heatwave definition this coming week, and has been defined as a ‘severe heatwave’.

Perth can expect its hottest week in three years, averaging a maximum of about 38 degrees from Saturday to next Friday. The last time the city averaged 37 degrees over a week was in December 2012 when it averaged 39.3 degrees (The city’s hottest week on record is 41.0 degrees, set in February 1933).

The offshore movement of the trough drawing in the heat will deliver dry, gusty northeasterly winds and prevent seabreezes from bringing significant relief to the city.

Heatwaves are a silent killer and have taken more lives in Australia over the past 200 years than any other natural hazard. As this heatwave is expected to fit into the severe category, take care, keep hydrated and shelter from the heat as much as possible.