Home > News > Australia: NSW struggles on in the droug...

Australia: NSW struggles on in the drought 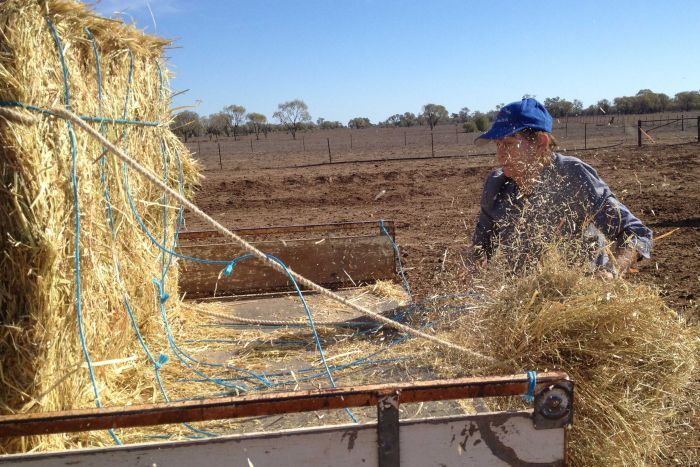 As the kangaroos and emus around her property die in the dry of the drought, May “Bushie” McKeown is doing all she can to keep her cattle alive.

The 76-year-old has been on the land at Come By Chance, in north-west New South Wales, for almost all her life, and said she had never seen things so bad at Longview station.

Her property has not seen decent rain since January 2012, and conditions are so harsh that “you can hardly stand up in the wind and see yourself in the dust”, Ms McKeown said.

The drought has forced her to hand-feed her cattle every day for almost two-and-a-half years.

“If you didn’t feed them they’d die.

“I used the tractor in the morning and went over in the afternoon and there’s a kangaroo dead under it, just through starvation.

Ms McKeown said she was grateful for the help she had received to date, including some hay bales, but she could not understand why producers in her area could not access the State Government’s water infrastructure rebate scheme.

The scheme allows farmers to claim half the cost of installing water infrastructure for animal welfare needs up to $20,000, but Primary Industries Minister Niall Blair said the Come By Chance area was not eligible.

“To be eligible … farmers must be experiencing a one-in-50-year rainfall deficiency for 12 months or more, as determined by the Bureau of Meteorology’s Rainfall Deficiency Analyser,” Mr Blair said in a statement.

He said 3,260 applications had been approved to date, and a “range of support measures” were available for Come By Chance producers.

“That would be a big help to a lot of people, but they don’t get the areas right,” she said.

Despite the hardships, Ms McKeown said she could never walk away from the property.

“I break up the monotony by ringing up a few people – my sisters, and I go to town occasionally.

“We just keep plodding along, selling off the calves to keep the others going.”

When the ABC chopper lands at Yathonga station, near Louth in western NSW, the dust flies. The rain clouds gather, there are spots of rain, but nothing sticks to the ground.

The Le Lievre family have been in this part of the world, south-west of Bourke, since the 1800s and at Yathonga since 1987.

For father-of-five Stuart Le Lievre, the past 15 years have been a struggle on what had traditionally been considered reliably productive land.

“We had a couple of wet years in between, but we just haven’t been able to get any continuity of any kind of climate, so it’s either been two years too wet and the rest of it, the other 13, too dry.”

He described his current situation as one of “hanging on – each year you slip back a bit further, that’s all there it is to it”.

With far fewer merinos, Mr Le Lievre has begun construction on an integrated pipeline water system which will “make our ground tanks a lot bigger, so we’ve got at least two years of water, hopefully three”.

“Most of the ground tanks are dry or have got very little in them – we’re relying on pipelines from the river and solar pumping system.

His wife, Gabbie Le Lievre, said the drought condition meant the family had never been able to take their five sons on a family holiday.

She is looking forward to the day that there’s enough rain that her five sons can “play in the mud”.

“There’s always someone far worse than us.”

For now, “the water in their bathtub is just like coffee, but the boys just think that’s normal”.

“They just bath in it, brush their teeth in it – they just think that’s normal,” Ms Le Lievre said.