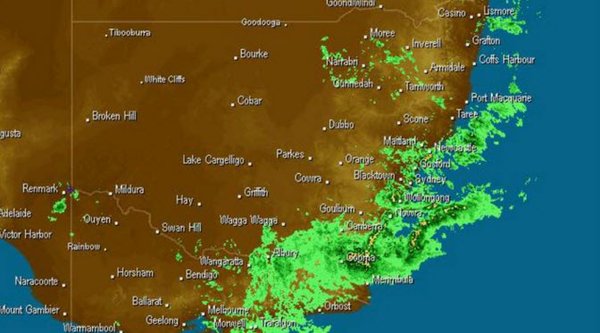 A group of campers trapped by floodwaters on NSW south coast has been reached by the State Emergency Service, who have dropped off food and essentials.

A rescue helicopter and ground crews had been trying for two days to get to the 40 people stranded in isolated country in the Deua National Park, west of Moruya.

SES Controller Geoff McMahon said it was still too dangerous to attempt a rescue and the group may be stranded until Saturday.

Hundreds of people have called for help amid record rains and flooding in New South Wales. https://t.co/CPOQZGjVuc https://t.co/0wpQwE03s0

“We believe the Deua River levels will be low enough that they can get out on Saturday and we want to be there because we don’t want people rushing in,” he said.

“The last thing we want is people trying to get over when the water is too high and getting into trouble.”

Camper Deborah Baker said they had been drinking rain water and living off rations.

“Thank God to Donna and Ronny who had some supplies in their trailer but there’s no meat, nothing,” she said.

“I’m living off vegemite and water, so we’re pretty hungry but the morale amongst all of us is pretty good, we’re keeping the spirits high, we’re finding things to do.

“It’s been a wild experience … Never, ever thought this would happen.”

Mr McMahon said the campers, including five children and an eight-month-old baby, were fairing well.

“There’s three areas where the campers are and each group has got together, those people who didn’t know each other are now friends,” he said.

“They are content, they have told us that they don’t need too much except that they are beginning to run short of provisions and would like some more luxury items.”

Many of the campers were anxious to get back to dry land.

Authorities are urging people to stay away from flooded areas even as conditions ease in the coming days, with rivers and creeks expected to carry large volumes of fast-moving water for some time.

Meanwhile in the Hunter region, forced evacuations and prompted dozens of flood rescues.