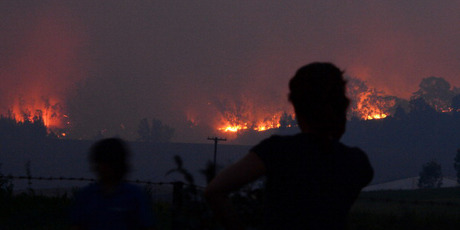 Cooler weather and lighter winds helped fire crews gain control of bushfires raging across New South Wales Wednesday as formal investigations began into the cause of the blazes.

Sixty-three fires were still burning in Australia’s most populous state, 25 of them uncontained and many in western Sydney, but a significant drop in temperatures and easing winds proved a welcome relief after challenging conditions.

“Over 1,200 firefighters and 350 trucks battled these blazes yesterday,” the NSW Rural Fire Service said on its Facebook page, adding that 1,800 hectares (4,447 acres) were burnt.

“Backburning was undertaken last night as containment lines were built or strengthened. Cooler temperatures and slower winds will help firefighters today,” it added.

The fierce infernos that erupted Tuesday, unusually early in the season, left six firefighters injured and destroyed one home, revised down Wednesday from two reported by authorities previously.

NSW Rural Fire Service Commissioner Shane Fitzsimmons said all fire alerts had been scaled back and there were no longer any emergency warnings in force.

“Conditions have moderated considerably but there’s still a lot of work to do,” he told ABC radio, adding that he could not rule out that the fires had been deliberately lit or were the result of backburning.

“We have a number of fire specialists and police officers that will be out there this morning… and they’ll be doing investigations into cause and origin,” he said.

The fires followed 27 dry days in Sydney and mark an early start to the bushfire season, just days after the official end of winter.

Australia has just experienced its warmest 12 months on record, with the last summer witnessing an unprecedented heatwave, as well as bushfires and floods, seeing a government commission dub it an “Angry Summer”.

“It is a stark reminder that summer is around the corner and when the weather ingredients are right you’ve got a recipe for fires to start quickly and start easily,” said Fitzsimmons. 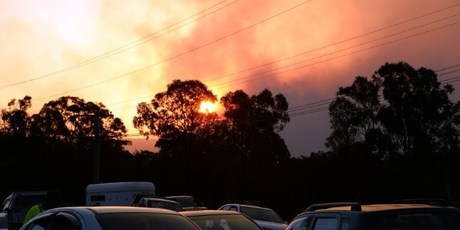 While fire crews in New South Wales were getting on top of the situation, colleagues in Queensland were on alert with hot and windy conditions through large parts of the state which, like New South Wales, has only had minimal rain over the past six weeks.
“Very dry, low humidity and high winds coming in from the west, so that’s a pretty dangerous situation,” Peter Varley from the Rural Fire Service said of Queensland.