Australia – May snow in Tasmania 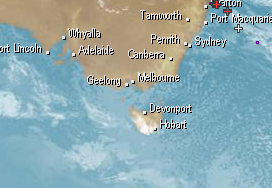 There were wintry scenes across Tasmania yesterday morning as temperatures plummeted in the wake of a cold front.

The morning commute in Hobart was a bit harder than usual as blustery winds made it feel like just three degrees at 9am. Southwesterly winds increased further in the afternoon, making it feel even colder by lunchtime.

A veil of cloud capping Mount Wellington yesterday morning made for an impressive view, although snow and wind made conditions far from pleasant on the mountain’s peak.

Snow also fell in the state’s central highlands on Tuesday morning, where guests at Cradle Mountain Hotel were treated to an early-season dusting of snow as they ate breakfast.

The snow won’t stick around for long though. Temperatures are forecast to warm up progressively during the rest of this week.