Australia: July continues to smash heat records across the country 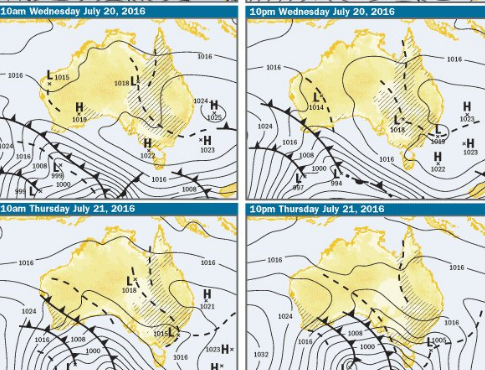 During the pitter-patter of rain on the roofs, many places across NSW experienced their warmest July night in records.

A tropical air-mass has moved over NSW after dousing QLD with unseasonable rain, bringing thick cloud and warm air. Although it’s been noticeably warmer during the days, the night-time temperatures were the most outstanding.

Astoundingly, the entire Hunter region had their warmest July night on record. Weather stations with reliable climatologies reported seven-to-twelve degrees above the norm for July. Some of the records that have tumbled include Nobbys Head at 17.1 degrees, Cessnock at 16.3 degrees, Tocal at 15.4 degrees and Williamtown at 15.7 degrees.

Strong negative #IndianOceanDipole is influencing Australia’s rainfall. So what is the IOD? https://t.co/z5TdeuIiIFhttps://t.co/PDm6MEuIvt

Similarly, most of the Central Tablelands had their warmest July night, such as Katoomba at 12 degrees, Bathurst at 12.5 degrees, Orange at 12.5 degrees and Oberon at 11 degrees.

The warmth wasn’t confined to the east; Tibooburra and Brewarrina recorded back-to-back record warm nights according to the 9am minimum today and yesterday. Respectively, these minimums were 16.2 and 17.6 degrees at Tibooburra and 15.6 and 16 degrees at Brewarrina. In fact, temperatures in the Upper Western have failed to cool below 11 degrees for about 48 hours.

Taking into account each station and it’s respective climatology, last night NSW was roughly 9 degrees above the norm for this time of year. No station recorded a minimum below their average, and it was as much as 14 degrees above their July nighttime average in Wanaaring.

Warmer temperatures will persist across the days and nights until Friday, when a cold front will bring a brisk and showery cold change. As this front clears the state by early Saturday, cool, westerly winds will usher in a return to temperatures more indicative of winter.

The average minimum for the month of July is 0c and the lowest temperature so far this month has been -5.2C.

The overnight temperature, 11.1C, was so high it almost matched the mean maximum temperature for daytime in July of 11.4C.

Forecaster Ilona Coot said the lack of a high-pressure system meant Canberra had been kept warm by a blanket of rain clouds.

“The most recent front that we saw come through was actually quite weak,” she told 666 ABC Canberra.

“As a result we’ve seen quite warm, moist air sitting over the ACT and NSW.”

Ms Coot said Tuggeranong may have also seen its warmest July temperature on record yesterday Ã¢?? with a maximum of 18.5C.

Nationally, according to meteorologists, marking the 14th consecutive month that global heat records have been broken.

Canberra is expected to see more rain throughout the rest of the working week, but the weather bureau said it would begin to ease towards the weekend.

July has been an eventful month for the national capital, which was last week treated to.