Australia: ‘Huge’ cleanup in NSW could cost hundreds of millions of dollars 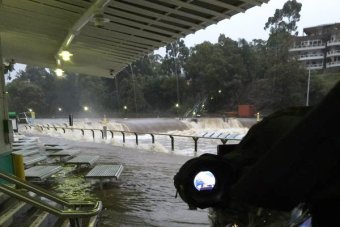 The damage bill from the massive storm that devastated parts of New South Wales and left four people dead could run into the “hundreds of millions of dollars”, Premier Mike Baird has predicted.

Mr Baird toured the worst hit areas of the state in the Hunter Valley region, west of Newcastle, and said the clean-up and repairs to damaged homes and roads could take months to be completed.

When asked to estimate the extent of the damage, Mr Baird said the sheer destruction on the ground made it difficult to nominate a figure.

“We obviously haven’t got numbers yet, but it’s vast,” Mr Baird said.

Today I am seeing first hand the destruction that came, without warning, to some of our towns in NSW. pic.twitter.com/vT4UIBpCGz

“When I looked at what I just saw I was in shock, to be honest, in terms of the size and scale of what we are confronting here.

“There is no doubt going to be a very big bill, and it is undoubtedly going to be in the hundreds of millions of dollars.

“But the important point is here it’s not the cost, it’s not the dollars, it’s the people that we have to support and that’s exactly what our focus is and that’s what everyone is working towards.

“You can’t really appreciate the size and the scope of the devastation until you see it first hand and it is nothing short of devastating.

“What we’ve seen is homes, cattle, this whole landscape has been completely and utterly devastated, there are flood waters everywhere and [it’ll be] a long time until we get back or get this community back on its feet.

“Patience is a requirement, but inspiration is very thick on the ground.

The problem now for emergency workers is that another storm has been forecast off the NSW coast by the end of this week and this could hamper clean-up operations and provide further damage.

“There is another front coming in a few days, so really we want to try and get as much as we possibly can done in the next few days,” Mr Baird said.

“But clearly there is concentration of resources that are coming to this region.”

NSW State Emergency Service Commissioner Adam Dent said crews were working against the clock with the prospect of another low pressure system by the weekend.

“Our difficult days … have indeed passed us so far, although there is still some concern of further weather over coming days and we’ll continue to work with the weather bureau to monitor this,” Commissioner Dent said.

“At the moment New South Wales SES has responded to over 14,000 requests for assistance since Sunday morning and 5,000 of those have been in the Hunter.”

SES workers ferry food to homes cut off by floods

An additional 54 SES workers have been flown in across the border from Victoria, along with 30 from the ACT and 50 still to arrive from Queensland.

“All of those crews are currently looking at having replenishment crews available for us,” Commissioner Dent said.

“Across the state, over 1,500 SES volunteers are involved in the operation, so he we are actually very, very well resourced.