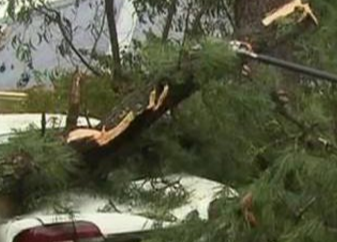 Heavy rain has flooded a number of outback roads in South Australia’s far north, with between 40 and 60 millimetres recorded in some areas over the past few days.

Large stretches of the Oodnadatta, Birdsville and Strzelecki tracks are closed to all vehicles cutting off several towns including William Creek, Oodnadatta and Innamincka.

Weather bureau senior forecaster Vince Rowlands said the rain over the north of the state had now cleared and was heading south, with heavy showers and gusty wind forecast for Adelaide this afternoon.

“[We’re] looking at some fairly heavy showers pushing across the city and particularly up in the Mount Lofty Ranges during this afternoon,” he said.

He said the city was forecast to get between 8 millimetres and 25 millimetres.

A wild weather warning has been issued for parts of South Australia… #sun7 https://t.co/Z5iJ9NID8o

Across the Mount Lofty Ranges there is a potential for 40 to 50 millimetres.

“Obviously with the showers coming over we will see some pretty heavy showers so some areas are going to get a bit more than others,” he said.

Wind gusts of 90 to 100 kilometres per hour are possible with squally showers or thunderstorms over the ranges, it said.