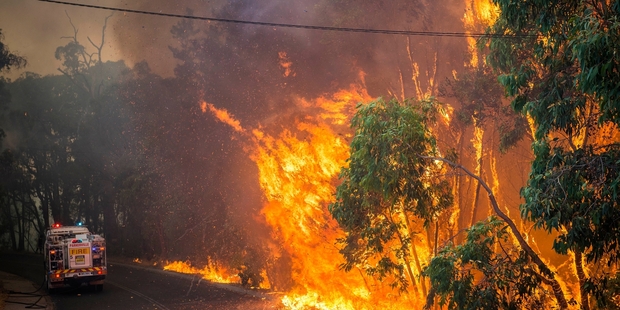 The searing heatwave that has engulfed southeastern Australia since the start of the week, sparking hundreds of fires and prompting serious health warnings, has at least two days to run.

The heat, reaching into the mid-40s in some areas, will continue today and peak tomorrow, when firefighters are braced for what is expected to be their biggest challenge as strong winds sweep ahead of a cool change.

Late yesterday emergencies were declared as fires raged near Hopetoun, 400km northwest of Melbourne, and Yaapeet in Victoria’s western Wimmera region. Authorities were preparing for more fires from lightning strikes through South Australia, Victoria and New South Wales, and were struggling to contain out-of-control fires ahead of tomorrow’s furnace.

Temperatures again topped 40Â°C in Adelaide yesterday, the fourth-hottest day since records began more than a century ago. The mercury is forecast to rise to 46Â°C today – just below the record 46.1Â°C set in 1939 – before slipping to 40Â°C tomorrow ahead of the cool change.

Melbourne will hit 41Â°C today and 42Â°C tomorrow, before plunging to 23Â°C on Saturday. The present run of 40Â°C-plus days has been exceeded only by the buildup to the 2009 Black Saturday fires.

Eastern Sydney, with other coastal areas cooled by onshore winds, will continue to escape the worst, with temperatures hovering around 30Â°C. But in the western suburbs temperatures will remain in the high 30s, and many inland areas will endure two or three more days in the 40s.

Record temperatures have also been recorded in Tasmania, rising to as high as 40Â°C in parts of the state.

Massive precautions have been taken to protect the vulnerable from the heat. Pools and beaches have been packed, and Melbourne beaches have had thousands of people swimming into the night to escape lingering heat.

Despite warnings, emergency services members have broken into cars to remove 11 children in danger of death from heat stress. One Sydney woman has been charged after leaving her baby locked in a car in Lakemba, in the city’s southwest. In Melbourne, the heat has hammered power supplies – leaving 20,000 people without power on Tuesday night – and affected train services.

Total fire bans cover large areas of Tasmania, SA, Victoria and NSW. In SA firefighters were battling dozens of fires, including a blaze near Rockleigh in the Adelaide Hills in which a woman was seriously burned trying to save pets from her home, and which has swept through 5000ha of land.

More than 200 fires were sparked by lightning strikes on Tuesday night. Dozens of bushfires, many also started by lightning, were late yesterday burning in Victoria, mostly in the northwestern Mallee region. A cafe has been destroyed on the Mornington Peninsula, southeast of Melbourne.
Firefighters were late yesterday fighting almost 30 fires in NSW, including two out-of-control grass fires near Griffith in the state’s southwest, and another in a forest in Big Oaky Valley, in the Upper Hunter region.