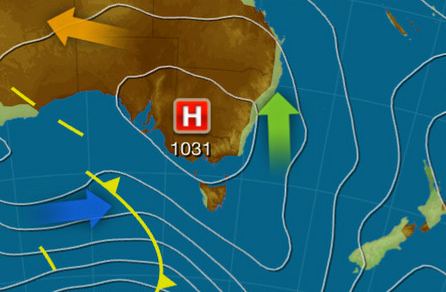 The start of winter has been remarkably cold for much of southern and eastern Australia, with some areas experiencing their lowest temperature in years.

Conditions have been ideal of overnight cooling recently thanks to a large high pressure system centred over the nation’s southeast. Clear skies and light winds have allowed daytime warmth to escape easily after sunset.

South Australia’s Nullarbor recorded its lowest temperature in 10 years Friday morning when it reached -2.5 degrees. Elsewhere in the state, it was the coldest morning in five years at Cummins (-1.5C) and Kingscote (-1.5C) and four years at Coonawarra (-2.6C), Naracoorte (-2.5C) and Robe (-1C).

Another notable low yesterday [Friday morning] was Canberra’s -5.1C, which is the coldest so far this year. Places in New South Wales that recorded their lowest temperature in three years included Griffith (-3.1C), Cobar (-4C) and Condobolin (-4.3C). Casterton in Victoria dipped to -1 degree making it their coldest morning in four years.

Not even the tropics have escaped the chill. Georgetown in northern Queensland shivered through its coldest morning in two years, dipping to 4.9 degrees shortly after 6am.

Put the kettle on and keep the blankets piled up, because tonight is going to be another frosty one across a large swathe of the country.