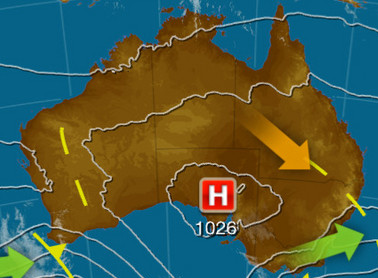 An unusually hot and dry airmass for mid-winter will sweep over parts of South Australia, Victoria, NSW, the ACT and southern Queensland on Saturday and Sunday, ahead of an approaching front.

The warm air will be accompanied by strong northwesterly winds, followed by a blustery westerly change as the front sweeps through.

The combination of air this hot and dry accompanied by wind gusts potentially reaching 70-90km/h is rare during winter. This disconcerting mix of weather elements would be fitting during spring and it is likely to elevate fire danger ratings across multiple states during the weekend.

Saturday will be the worst day for South Australia, Victoria and western NSW. Temperatures are forecast to reach record highs for July in Bourke (29C), Ivanhoe (28C) and Yunta (27C), while Griffith (25C), Orange (17C), Renmark (28C) and Thargomindah (30C) are all forecast to get within a degree of their July heat records.

On Sunday, the heat will be pushed further east as the front progresses towards the Tasman Sea. Sydney (26C) and Cessnock (26C) are both forecast to set new July heat records on this day, while Walgett (28C), Moree (26C), Narrabri (25C) and Richmond (26C) are all forecast to come within two degrees of their long-term July records.

In addition to the hot, dry and windy weather, dry vegetation across parts of Australia’s southeast is likely to contribute to an elevated out-of-season fire threat this weekend.

Parts of the southern Murray-Darling Basin and Tasmania had their driest June on record. While July rainfall has been better across this region, it hasn’t been enough to make up for the early-winter deficits.

Much of northern SA and NSW and pockets of Victoria and eastern Tasmania have recorded less than 20 per cent of their July monthly rainfall totals during the first 26 days of July.

Temperatures will drop by 5-10 degrees in 24 hours for many locations as the cold front sweeps across South Australia, Victoria and Tasmania on Saturday, followed by NSW, the ACT and southern Queensland on Sunday and Monday.