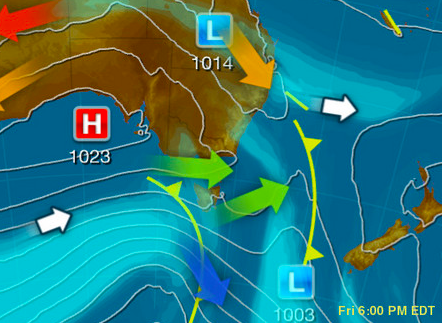 Skies have darkened over Brisbane and Sydney this afternoon as thunderstorms rolled through both capital cities.

A broad low pressure trough draped across eastern Australia and a cold front moving over NSW produced the storms, some of which have produced hail and blustery winds.

A line of storms formed west of Brisbane late in the morning before sweeping over the city shortly after lunchtime. A severe storm warning was issued before a wind gust of 82kmh was recorded at Beaudesert around midday. A rain gauge near Amberley registered 15mm of rain one hour.

Thunderstorms started to develop in Sydney shortly after midday and within the next hour, multiple cells were besieging the Basin. Small hail was reported in Berowra from one of the intense storms.

Storms remain a threat over parts of both cities for the rest of this afternoon and into the early evening and may become severe.

Stay up to date with the latest warnings here: http://www.weatherzone.com.au/warnings.jsp