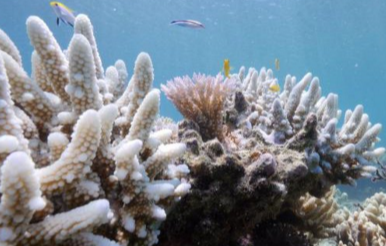 The extreme bleaching event, which began several weeks ago near Lizard Island off Australia’s northeast coast, has prompted the Great Barrier Reef Marine Park Authority to raise its response level to its highest level (3). This allows for greater surveying and monitoring of the fragile reef ecosystem.

WWF spokesperson Richard Leck called it “the worst coral bleaching event ever to hit this most pristine part of the Great Barrier Reef.”
Driven by ocean temperatures that have been 1-2 degrees Celsius (1.8-3.6Â° F) above average, the recent coral bleaching event has left “large sections of coral drained of all color and fighting for survival.”

The National Oceanic and Atmospheric Administration website describes coral bleaching: “When corals are stressed by changes in conditions such as temperature, light, or nutrients, they expel the symbiotic algae living in their tissues, causing them to turn completely white.”

El NiÃ±o has likely played a large part in the coral bleaching events this year in the Great Barrier Reef, as well as in Hawaii and Fiji. El NiÃ±o is characterized by warmer than average ocean temperatures in the Pacific Ocean and El NiÃ±o years frequently contain the worst bleaching in Pacific region reefs.

But coral bleaching is also “the most widespread and conspicuous impact of climate change,” according to the U.N.’s Intergovernmental Panel on Climate Change, and events like this one in the Great Barrier Reef are effects of climate change that scientists have predicted and feared.

Coral reefs are important to ocean ecosystems and continued bleaching events from ocean warming and acidification will damage reef-based fisheries, increase exposure to coastlines from waves and storms.
It also will damage economies that depend on ecotourism, such as those in Australia and the Caribbean.