Home > News > Australia: Darwin about to be drenched b...

Australia: Darwin about to be drenched by another tropical low 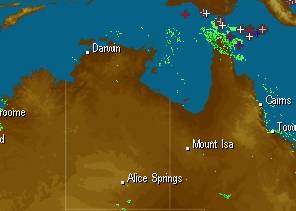 Weather forecasters are predicting a tropical low currently building strength in the Gulf of Papua will bring the Top End yet another burst of wet weather ahead of the start of the dry season.

In what is shaping up to become the second wettest wet season on record, Darwin has so far exceeded the normal rainfall levels in every month since October.

Forecaster with the Bureau of Meteorology in Darwin, Ben Price, said while there was uncertainty about how the low pressure system currently located off the coast of Cape York would develop, it was likely to move over the Arafura Sea.

It is expected to start affecting Darwin’s weather late on Tuesday and continue to provide good rain until about Saturday next week, when it is tipped to drift further westward, towards Western Australia.

“We might see some localities getting 30-50mm or so,” Mr Price said.

“It certainly has the potential to produce more than that.”

Mr Price said the low pressure system was unlikely to become a cyclone, but forecasters were keeping a close eye on it.

He said it was unusual for low pressure systems to develop so late in the wet season, which officially ends at the end of this month.

“I think Darwin should be OK for Anzac Day, but it depends on how quickly it moves across,” he said.

Darwin has so far experienced 2,480.8mm of rain since October 1, making it the third wettest wet season on record, and it needs just another 18.6mm to equal the second wettest season.