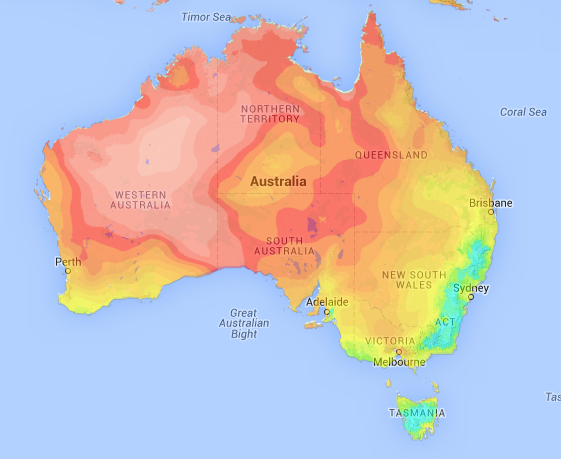 A scorching heatwave is building across the country this week with the Bureau of Meteorology (BoM) forecasting severe and extreme conditions in parts.

Temperatures are predicted to rise from Tuesday in all states except Tasmania, caused by a large high pressure system moving east across the country from Western Australia.

Severe heatwave conditions are first predicted for the western Top End Tuesday, rising to severe in some parts on Wednesday.

By Saturday large areas of the Top End and the Kimberley are expected to experience severe heatwave conditions.

Low intensity to severe heatwaves are tipped to continue into the weekend in Queensland and north-east NSW, after beginning to rise earlier in the week.

Darwin will be hit the hardest of all the capital cities receiving temperatures around 35 degrees Celsius until Sunday.

In Sydney temperatures are forecast to 33C on Wednesday, peaking at 38C on Friday.

Friday looks to be hottest day in the run with high 30s likely in all suburbs, Weatherzone has reported.

It said there was potential for some places, particularly in western suburbs, to see their first 40-degree day since last year.

Temperatures in Brisbane will hit 30C on Wednesday and peak at 34C on Saturday.

Melbourne’s weather will reach 31C tomorrow and peak at 34C on Thursday.

Regional areas in both New South Wales and Victoria can expect temperatures in the 40s.

Canberra residents will experience temperatures between 30C and 33C between Wednesday and Friday.

In Adelaide, BoM is forecasting 34C on Tuesday, 38C on Wednesday and 35C on Thursday.

Weatherzone said South Australia was on track for its hottest spell since summer and hottest November spell in six years.

Perth is forecast to experience a peak temperature of 35C on Saturday.