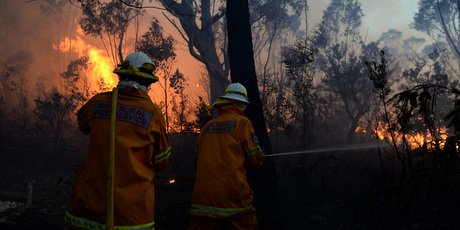 Firefighters are working to strengthen containment lines around three blazes burning uncontained in the Blue Mountains as the bushfire emergency in NSW eases.

As the state’s bushfire crisis enters its ninth day, there are 57 bushfires burning across the state, with 23 uncontained, the Rural Fire Service says.

There are three “Watch and Act” alerts current for blazes burning at Springwood, Mt Victoria and Lithgow that have now burnt through almost 60,000 hectares of bush since sparking late last week.

Other fires that previously threatened property in the Lake Macquarie area and Southern Highlands have been downgraded to “Advice”.

An RFS spokeswoman says firefighters in the Blue Mountains are taking advantage of cooler temperatures to strengthen containment lines.

“The threat is continuing to ease but we’re still asking people to be vigilant because there is such a large amount of fires still active,” the spokeswoman told AAP.

“Overnight it has been back burning on most of those fires and patrolling the containment lines, as well as mopping up and blacking out.

“With the cooler weather we want to strengthen those containment lines.”

She said there were currently more than 800 firefighters in the field and 72 aircraft deployed.

She said forecast cooler weather for the Blue Mountains would assist firefighters through Friday, but that low humidity was also expected and would add to the fire risk.

Winds were expected to be from the northeast and northwest at up to 30km/hr, she said.

More than 120,000 hectares of bush has so far been burnt across NSW since the crisis began last Thursday.

National Rural Fire Officer Murray Dudfield said Kiwi crews would remain ready to assist, but had been told help was not required at the moment.

“New South Wales fire authorities have carried out an assessment of the resources they will need over the next two weeks and are comfortable they can manage without assistance from New Zealand,” Mr Dudfield said.

The New South Wales planning team was appreciative of New Zealand’s offer of support and, should the situation change, would re-examine what is needed.

“Obviously, we are ready to help if and when needed during the Australian wildfire season.

“We have seasoned crews, experienced in remote and tall timber firefighting.”