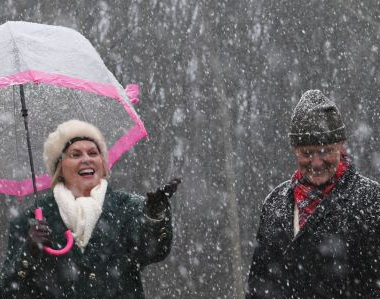 A bitter cold that brought winds, hail and snow to Victoria is set to continue for the state but destructive winds will dissipate.

The Bureau of Meteorology predicts today will have the worst of the weather, with temperatures close to zero expected across Victoria and strong winds and thunderstorms hitting coastal areas.

The cold air mass is a “classic Antarctic blast” that originated near the coast of Antarctica during the week, the Bureau said.

The State Emergency Service received more than 1000 calls following winds up to 100km/h that uprooted trees and caused widespread damage to property and roads.

Snow is falling near Melbourne as the big chill hits the state https://t.co/sP5qVc2U8N pic.twitter.com/A851uWfdad

“Our volunteers have been kept fairly busy throughout the day,” he said.

“Some of our busiest units have been Frankston, Hastings and the bayside suburbs of Melbourne.”

Snow also fell in Victoria’s northwest, with towns like Ballarat and Trentham hit by temperatures below 2 degrees.

“Wind chill is expected to be extreme through Melbourne. It will feel like zero through most of the day,” senior meteorologist Adam Morgan said.

Look, if you don’t need to go outside today in Melbourne, just don’t. it’s horrid. Just kidding.
It was hailing today.