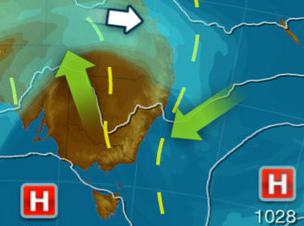 Hazard-reduction burning in the east and west brought a hazy start to the weekend in both Sydney and Perth.

Visibility fell to 150 metres at Richmond Airport on Saturday morning as fog mixed in with the smoke. In the Perth area, visibility is was reduced to about two kilometres during the morning.

The Air Quality Index (AQI) was forecast to be poor (AQI 100-149) for both cities. Smoke may create breathing difficulties and people with lung or breathing conditions (including asthma) are advised to avoid long periods of outdoor exercise today.

This smoke has been trapped close to the ground under an inversion layer, where the temperature increases as you move upwards. The result is a barrier that prevents the pollution from leaving the basins and decreases the air quality.

The inversion layer slowly weakened in Sydney during Saturday morning, allowing some of the smoke to escape. However, the inversion layer over Perth was much stronger and only broke down on Sunday morning. Both cities can expect a gusty change and cleansing rain on Sunday, clearing the skies of the haze.

Typically, around 10% of days are classified as a poor air quality or worse in Sydney and Perth each year. These days mostly occur between May and July during peak hazard-reduction season. Almost all of these poor-air days occur because of smoke.