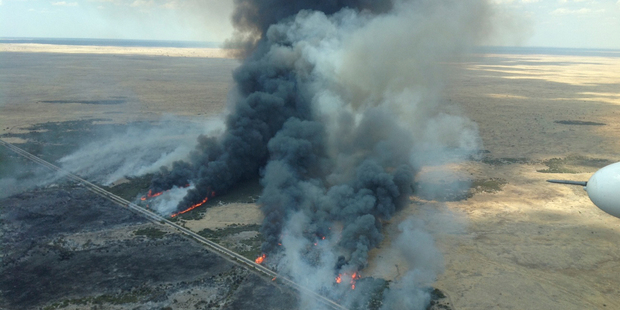 As Adelaide yesterday became the hottest city on the planet for a day, the week-long heatwave that has gripped the west and southeast of the continent continues to fry Australia.

Temperatures again hovered in the mid-to-high 40s in Adelaide and Melbourne, and across much of inland South Australia, Victoria and New South Wales, stretching emergency services to their limits.

Worse may be in store. While the weekend is expected to bring relief with a cool southerly change, fire and health authorities fear today could be their most critical period as strong, gusty winds drive through the furnace ahead of the new front.

Fire authorities have also warned that the heatwave has stripped all moisture from bush and grassland, creating a volatile, dangerous tinder for the remaining six weeks of a blazing summer.

And this may be just the harbinger of deadlier summers ahead.

The Climate Council, now a private organisation after its federal predecessor, the Climate Commission, was axed by the new Coalition Government, warns that Australia is facing hotter, more frequent, longer-lasting heatwaves as the planet warms.

The council yesterday released an interim report on heatwaves, showing that between 1971 and 2008 the number of hot days had doubled and the frequency and duration of heatwaves had increased.

A heatwave is defined as at least three consecutive days during which temperatures reach into the top 10 per cent of recordings for a given time of year.

Australia this week has easily met the definition, with many areas enduring four or five days above 40C.

Adelaide has reached record levels, and Melbourne has now endured its longest run of above-40C days in a century.

Inland areas of SA, Victoria and NSW have seen the mercury reach as high as 48C.

The council’s report said the frequency of heatwaves would increase significantly, and last on average up to three days longer than at present. Maximum temperatures would also rise.

“As greenhouse gases continue to accumulate in the atmosphere from the burning of fossil fuels, more heat is trapped in the lower atmosphere,” the council said.

“This increases the likelihood that hot weather will occur and that heatwaves will become longer and more intense.”

The continent’s southeast would be the hardest hit, including Adelaide, Melbourne and Sydney.

The council said emergency, health and medical services needed to start planning now for the increasing intensity of summers ahead.

Services are already struggling to cope. Hospitals in SA and Victoria have reported a surge in heat-related admissions, health and welfare services are being pushed to ensure the safety of the young, the aged and the chronically ill, and train services have been hit.

All kindergartens and childcare centres in Adelaide were closed and power supplies in SA and Victoria have been disrupted by the surge in demand for air conditioning and increased demands on the national grid from other states.

In Victoria, Premier Denis Napthene urged people to cut electricity use to a minimum as peak electricity demand in the two states neared record levels.

Power authorities have warned of more potential cuts that could affect 100,000 Victorians and tens of thousands more in SA.

Fire services have been fighting hundreds of outbreaks in SA, Victoria and NSW, many started by lightning strikes, with a 20km-wide blaze near the western SA coastal town of Ceduna, and several in Victoria potentially threatening towns in the Wimmera and Mallee regions.